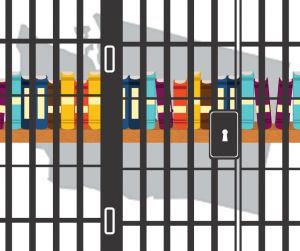 The Washington State Department of Corrections (DOC) reversed its decision to ban book donations from nonprofits after outcry from the public and local lawmakers, including WA Governor Jay Inslee, voiced questions about the ban. DOC had previous enacted the policy banning direct book and comics donations from nonprofits without warning to those organizations impacted. DOC claimed the change was necessary after a recent increase in illegal items, and cited 17 incidents where books were used to smuggle the contraband in. Except Joseph O’Sullivan, staff reporter for The Seattle Times obtained a reporting of these incidents, and the DOC’s own records tell a very different story.

According to O’Sullivan, of the 17 reported incidents, 12 have absolutely nothing to do with books at all, but instead involve things like an inmate being ‘booked for contraband’ and another where “an individual was caught with contraband by officer Booker.” It seems possible, and even likely, that the DOC just ran a search for the terms book and contraband, and handed over the list without even reading it.

As O’Sullivan points out, “While narrative accounts of those incidents provided by the DOC indicate inmates holding contraband inside the books, none say whether the items in question had entered the prisons inside the books.”

The loudest voice opposing this ban was from the nonprofit Books to Prisoners, who took to social media and spoke with the press about the ludicrous claims from DOC. In an interview with BookRiot, Books to Prisoners said,

And the list DOC provided only reinforces that book donation programs likely aren’t involved in smuggling contraband into prisons, but instead a straw man for DOC to use to censor reading material.

Governor Jay Inslee also spoke out against the ban, saying “Most of these folks are going to become our neighbors and we want to reduce recidivism rates, and education and the like is very, very important.”

A memo from Robert Herzog, the DOC assistant secretary who penned the original website memo announcing the ban, released another memo last week clarifying the policy reversal. According to another article by O’Sullivan, Herzog wrote:

“Concerns about contraband introduction led me to issue the original directive,” wrote Herzog. But, “After conducting further review, the data does not support continuing the restriction on donated, used books.”

“I am now reaffirming that the department will continue to support the receipt of donated, used books,” added Herzog, who wrote the original memo changing the policy.

Herzog also directed correctional facilities to review and strengthen protocols for screening books that come through prison mailrooms to make sure contraband isn’t getting in.

Nonprofits all around the country assist underfunded institutions and economically insecure inmates by providing, not just free access to books and graphic novels, but by providing a safe reliable and free way to assure that those materials are thoroughly checked for adherence to strict institution guidelines. These organizations rely on volunteers for the labor and offer families and inmates an alternate to having to buy books when they may not be able to afford it. Herzog’s implication that these books require additional screening is not only baseless, but destructive in the long run to the work that these nonprofits do.

Comics and books on How to Draw are among the most frequently requested for book donation organizations. Comics have Long been used to increase literacy (including visual literacy), establish reading for enjoyment habits, and spark interests in a myriad of subjects. Books that offer information on art and drawing help create constructive hobbies that inmates can participate in with relatively inexpensive supplies, and add to the culture of self-improvement that should be embraced by DOC instead of banned.

If you’re interested in donating some of your used comics and art books to inmates who can give them a second life, check out this CBLDF resource with book donation programs broken down by location.