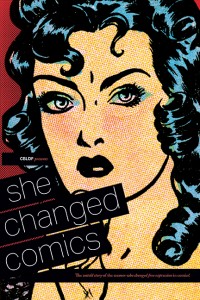 CBLDF is proud to announce that She Changed Comics, our book collecting profiles of more than 60 women who transformed the landscape of free expression and expanded the comics artform, has been named to the 2017 Amelia Bloomer List of notable feminist literature for young people! We’re in great company on the list compiled by the Feminist Task Force of the American Library Association’s Social Responsibilities Round Table.

The list has been compiled since 2002 and is named for Amelia Bloomer, the editor and publisher of the first newspaper for women called The Lily. The paper advocated for temperance and women’s rights issues, including the increased freedom of movement and activity afforded by the billowy pants that came to bear Bloomer’s name. The selection criteria for books on the Bloomer List include significant feminist content, excellence in writing, appealing format, and age appropriateness for young readers.

She Changed Comics, edited by CBLDF Editorial Director Betsy Gomez, is included in the Young Adult Nonfiction section of the 2017 Bloomer List. In addition, we’re thrilled to spot several other comics or comics-adjacent titles, including:

Check out the full 2017 Amelia Bloomer List here. Big thanks to the Feminist Task Force of SRRT for this recognition, not to mention the valuable annual resource!