“[Barefoot] Gen burned its way into my heated brain with the intensity of a fever dream” Art Spiegelman notes in his introduction to Barefoot Gen Vol. 1.  Even without the fever, Spiegelman was experiencing through his first read, Keiji Nakazawa’s semi-autobiographical manga is sure to stay with you long after you’ve consumed its final pages. Though it may seem childish in the first few panels, with its fart jokes and loud, childish, leads, Barefoot Gen refuses to look away from the atrocities committed by both America and Japan in World War II. 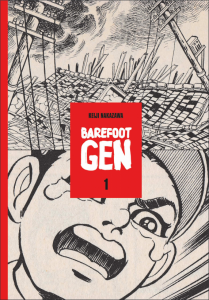 Keiji Nakazawa’s internationally renowned manga Barefoot Gen, which depicts wartime atrocities from the perspective of the seven-year-old protagonist, has fallen victim to several challenges in its home country of Japan. Barefoot Gen is loosely based on Nakazawa’s own childhood, as his father, two sisters, and a brother were killed in the atomic bombing of Hiroshima when he was seven years old. Nakazawa died of lung cancer in 2012, but his widow Misayo said he felt strongly “that he must share with children accounts of the miseries of the war and the atomic bombing to prevent a recurrence.” To aid in this effort, he donated 2,735 original drawings from the manga and 30 boxes of other materials to the Hiroshima Peace Memorial Museum. 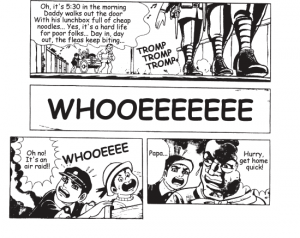 If you would like to prepare your own guidance for students with Barefoot Gen, check out the CBLDF Resources –

Adding Barefoot Gen to Your Library or Classroom Collection

To snag a digital copy of this life-changing manga, make sure you grab the Forbbiden Books Humble Bundle before it’s too late!