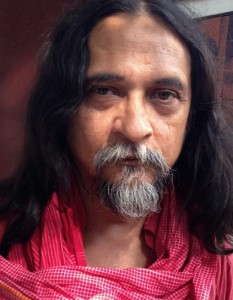 Last month, Indian graphic novelist and political cartoonist Orijit Sen’s cartoon “Punjaban” quickly became a viral hit after it was removed from Facebook when an anonymous user reported it for “containing nudity.” Despite the fact that an outpouring of support saw the cartoon reinstated, this is just one of many obstacles that Sen has had to overcome in his artistic career. In a recent interview with Samira Bose of The Caravan, Orjit Sen talks about the growth of a culture of fear, the increase in self-censorship in India, how defending his (and other’s) right to free expression has shaped his craft.

Sen has also become one of the most popular and outspoken political cartoonists in India. Whether it be the controversial image of a Punjabi woman dressing herself alongside a whip and high heels or the work that he has done depicting Prime Minister Narendra Modi, Sen’s work has as much been about expressing himself and his political views as it has been about opening a space for people who have never had the opportunity to do so. Many of Sen’s cartoons take advantage of a democratic government that has been more receptive to the middle-class majority speaking out about what impacts their lives. “I’m talking now of the educated middle class or the privileged class,” says Sen. He tells Bose:

A section of them have felt encumbered by the secular democratic project and they have selectively viewed matters such as reservation for Dalits or special privileges for Muslims, whatever few they might have been. They have always felt that this is “our” country, we are the majority, and yet we have not been able to speak about our grievances openly and exercise their privilege that was their due in all these years. And now it’s become legitimate to do so. At last, along has come a whole government and a milieu that goes with it that allows them to speak out and assert all their suppressed desires. 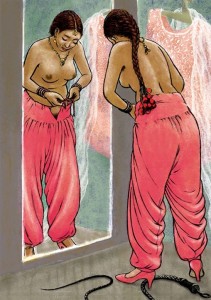 Despite this newfound space to express themselves, Sen notes that people now more than ever have been exercising a form of self-censorship, whether it be out of fear of reprimand or fear that their efforts to be heard would fall on deaf ears. “That’s when the idea of self-censorship really got me thinking about the dangerous trend,” says Sen, adding:

Self-censorship is like a termite eating society from within. Once people have got that fear in their heads, that they cannot speak about certain things, that they’re better off keeping their mouths shut, that they’re afraid to say things — that’s when the battle has been lost.

Although Sen laments this trend, cases like the recent Facebook incident instill faith that a newer generation of technologically savvy citizens isn’t afraid to stand up alongside him to fight for their right to free expression. “That attempt at censorship went haywire,” he says, “and had the opposite effect and also questioned this ‘no nipple’ policy that Facebook has been trying to put forward and why female bodies should be censored over male bodies.”

Whereas a younger generation is embracing their ability to express themselves, Sen notes that there is still work to be done in India. For all of those citizens still too afraid to express their concerns and opinions, Sen hopes to be their advocate through his art. Sen reminds us that he’s not only fighting for his own right to free expression he’s “fighting against this culture of self-censorship among people who know better.”

If people in this privileged position cave in like this, then what’s the hope? Who’s going to stand up? Is my carpenter going to stand up there and speak for democracy? I felt that it’s really important to not succumb to this fear and actually take it out there more.

← Attacks on Expression on the Rise Throughout the World in 2015
Sedition in 140 Characters or Less: Zunar on the Alarming State of Free Speech in Malaysia →