2015 wasn’t just a benchmark year for censorship in the United States, where we fought more challenges to graphic novels and books than we’ve ever seen. International censorship was on the rise, culminating in literal attacks on cartoonists around the world. Let’s take a look at some of the international stories CBLDF covered in 2015… 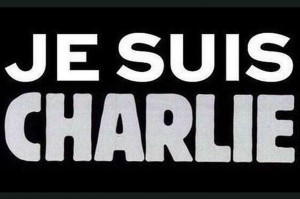 On January 7, the world was stunned into silence as terrorists attacked the offices of French satirical magazine Charlie Hebdo in Paris. Twelve people — including the cartoonists Charb, Cabu, Wolinski, Tignous, and Philippe Honoré — were killed in the attack, which was in retaliation for the magazine’s occasional caricatures of the Prophet Muhammad, among many other religious and political figures.

The world did not stay silent for long, as people declared “Je Suis Charlie” (“I am Charlie”), and cartoonists used their pens to express their sorrow, fear, and outrage over the attack. CBLDF officially condemned the attack and joined PEN America and Index on Censorship in publishing some of Charlie‘s most controversal cartoons in defiance of those who would use violence to stifle free speech.

The repercussions of the attack were evident in numerous stories throughout 2015 and surely for many years to come. 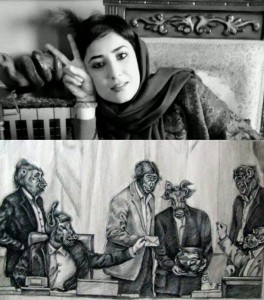 Iranian artist and activist Atena Farghadani was given a draconian sentence of 12 years and 9 months in prison for drawing a cartoon depicting lawmakers as apes and bovines. The cartoon mocked a bill that would ban various forms of birth control, including voluntary sterilization procedures such as vasectomies and tubal ligations, in an effort to reverse Iran’s falling birthrate.

After her sentencing, which followed a cursory trial led by a judge well-known for throwing the book at political activisits, Farghadani’s troubles continued as she and her lawyer were both charged with “non-adultery illegitimate relations” because they shook each other’s hands. Contact with unrelated members of the opposite sex is illegal in Iran, but rarely prosecuted. It was later disclosed that in the course of this secondary investigation, Farghadani was subjected to forced virginity and pregnancy tests. 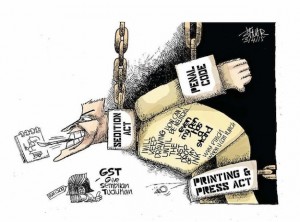 The latest round of the Malaysian government’s ongoing harassment against political cartoonist Zunar came to a head in February when he was charged with nine counts of sedition, which could carry a total sentence of up to 43 years in prison.

Zunar has been sparring with the ruling Barisan Nasional party for years, and most of his cartoon books are or have been officially banned in Malaysia. The sedition charges stem from statements that he made on Twitter following the sentencing of opposition leader Anwar Ibrahim on a trumped-up sodomy charge. Zunar hinted that the judiciary in that trial had been subject to political pressure or bribery, observing that “the lackeys in black robes are proud of their sentences. The reward from political masters must be plenty.” He then exchanged Twitter barbs — and a cartoon — with Inspector-General of Police Khalid Abu Bakar as officers were en route to arrest him.

Zunar, his staff, and supporters encountered further harassment as the year progressed, but Zunar remained characteristically defiant as his trial was postponed multiple times, most recently because Zunar is challenging the constitutionality of the sedition law under which he is being prosecuted, a law that predates the drafting of Malaysia’s constitution. 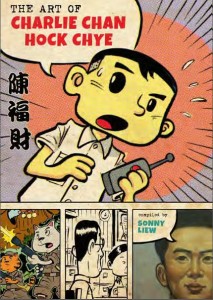 Due to unease over the book’s content, the National Arts Council in Singapore withdrew its grant to aid in the publication on Sonny Liew’s The Art of Charlie Chan Hock Chye.

The book, which was released in Malaysia this past month and is slated for release in the United States and other countries in 2016, represents a milestone in not only Liew’s career, but also for his home country of Singapore’s growing comics industry. Meshing fiction and non-fiction, Liew’s book is a historical expose of Singapore’s recent history and the individuals who helped shape the country. Tackling a difficult subject like Singapore’s historical struggle for independence, including the Hock Lee bus riots and notable figures Lee Kuan Yew and Lim Chin Siong and the repression of free expression, some — including Liew himself — had worried that the subject matter would impact the book’s publication.

In spite of this financial blow, though, Epigram Books — the Asian publisher of the book — went ahead with releasing the book, and within one short week all 1,000 copies printed sold out. “For most graphic novels, we print about 1,000 on average and these take two years to sell out,” founder of Epigram Books, Edmund Wee said. At least two additional printings were ordered to meet demand.

After UN Special Envoy Maud de Boer-Buquicchio recommended that Japan take steps to “ban manga of extreme child pornographic content,” along with a host of other tips for curtailing child sexual abuse in the country, CBLDF Executive Director Charles Brownstein wrote an in-depth commentary analyzing the cultural differences in the way manga is received and the reasons why banning manga would accomplish nothing to protect actual children. 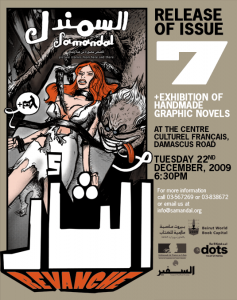 A five-year-old court case surrounding the controversial publication of religious-themed comics in a Lebanese magazine concluded in 2015 with three editors/artists of the magazine being found guilty of belittling Christianity, and each was fined $20,000.

In 2007, cartoonists Omar Khouri, Hatem Imam, and Fadi Baki founded the magazine Samandal, a trilingual publication out of Beirut that became one of the premier magazines for publishing both Middle Eastern and European comics. Addressing contemporary social issues, the magazine quickly became a venue that Lebanese cartoonists could use to talk about their lives, and it attracted the attention of European cartoonists as well.

In the seventh issue of the magazine, two cartoons were published that would put the three editors at the center of protracted legal proceedings and censorship battles. One cartoon by Lena Merhej, entitled “Lebanese Recipes for Revenge,” took common Lebanese phrases and illustrated them in a more literal sense. The cartoon depicted the phrase “May [God] burn your religion,” and showed a priest and imam doused in gasoline and set on fire. It caught the attention of the General Security and led to charges of “inciting sectarian strife” and “denigrating religion.”

Financially crippled, the magazine turned to crowdfunding in a last-ditch effort to survive. With its Indiegogo campaign, the association hopes to finance its next two annual anthologies, an online archive of back issues, and the hiring of a part-time coordinator.

These are just a few of the international stories CBLDF covered in 2015. Help support CBLDF’s important First Amendment work and reporting on censorship news in 2016 by visiting the Rewards Zone, making a donation, or becoming a member of CBLDF!