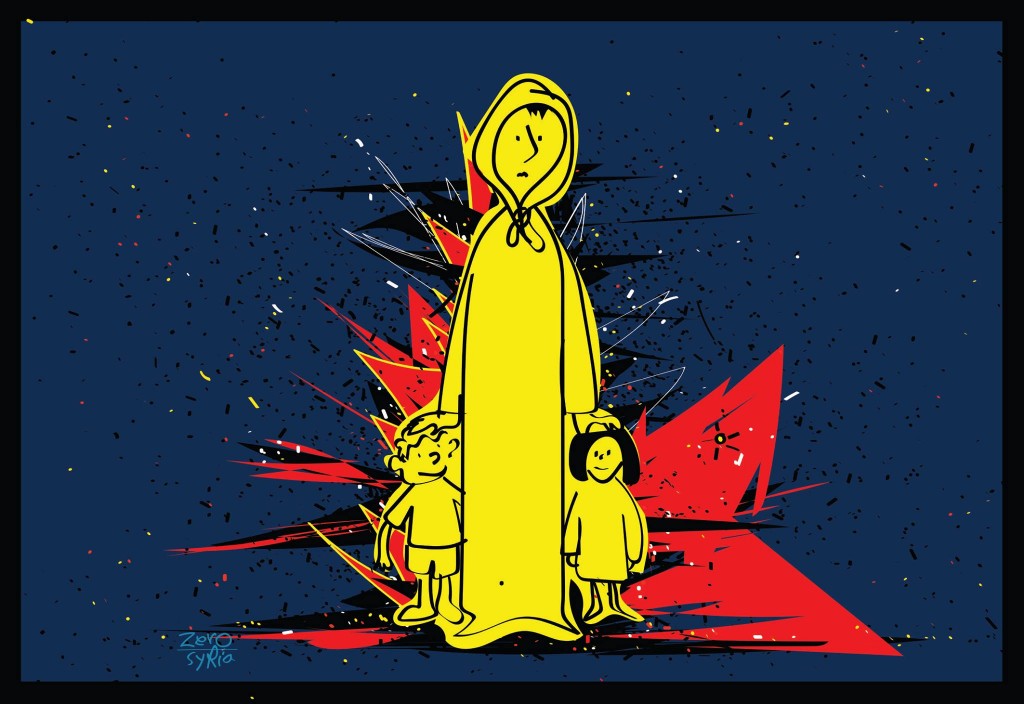 Six years after Syria’s uprising began, the future of the country is far from certain. But one surprising result of the turbulence is already apparent: an abrupt flowering of cartoons, comic magazines, and animated shorts spreading mostly through rebel-held areas and refugee camps. The website Syria Untold recently featured a selection of the sequential art and artists making inroads in the war-torn nation, where they must defy repression both from the government and from ISIS.

The cartooning renaissance was partly due to the difficulty for activists to use any sort of camera or video recording device without being monitored, prompting them to adopt other forms of visual storytelling and commentary.

Many Syrian cartoonists have been forced to flee the country, but still manage to share their work there through social media. The best-known refugee cartoonist is Ali Ferzat, who now lives in Kuwait after he was severely beaten and had both hands broken by Bashar al-Assad’s secret police in 2011. He was one of the most prominent caricaturists in Syria long before that, even briefly publishing the satirical magazine al-Domari in 2000 before it was shut down by the government. Ferzat now disseminates his cartoons via his Facebook page.

The young cartoonist who goes by the name Juan Zero, on the other hand, remains in the country and participates in a number of protest actions. He gained notoriety during the uprising and now shares his work mostly via Facebook. According to another post on Syria Untold, in 2013 he embarked on a project called Yasmin Baladi with almost 1300 children at the Bab al-Salama Refugee Camp in northern Syria. The goal, he said, was to “clean the color of blood from the eyes of children, ease the voice of war in their minds, and try to activate their childhood once again through daily activities, such as drawing, music, sport, theater, communication with other children via the internet, organizing interactive workshops, and other entertainment and educational means.” 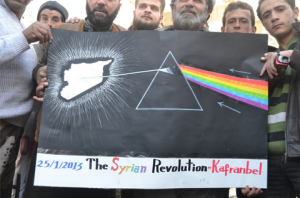 Another group of graphic artists who gained fame in Syria through protest are the townspeople of Kafranbel, a small village that became well-known for its witty and incisive protest signs. In 2014 assassins nearly succeeded in killing Raed al-Fares, the head of the Kafranbel media center who coordinated many of the signs and served as spokesman for the protesters. Rather than intimidating the people of Kafranbel into silence, the attempt on al-Fares’ life spurred them to yet another protest with more signs and banners. To this day, the protesters communicate their views to the outside world via Twitter, including an account in English.

Finally, Syria Untold highlights a handful of comic magazines that have arisen in Syria since 2012. Most of them have struggled to maintain a regular publication and distribution schedule due to the chaotic situation in the country, but there can be no doubt that an eager audience exists for them. Only one of them, Teen Baal (Wild Figs), is actually published inside Syria. The monthly magazine aimed at children and adolescents fills a sadly needed purpose, offering “safety instructions and emergency response basics for Syrian children living in war zones, in addition to a segment on creative recycling.”

Check out our past coverage of Syrian satire and cartooning since 2012: