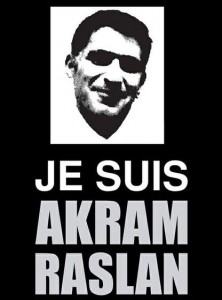 Three years since Syrian editorial cartoonist Akram Raslan was arrested by the Assad regime for “offending the state’s prestige” with his work, it is now all but certain that he died in government custody in 2013. Based on testimony from a fellow prisoner, Damascus news service Souriatna reported this week that Raslan was transferred to a prison hospital where he later died, possibly as a result of torture.

Raslan published more than 300 cartoons criticizing the Assad government’s human rights violations during Syria’s civil war which began in the midst of regional Arab Spring uprisings in 2011. After his arrest on October 2, 2012, media outlets and international NGOs had great difficulty pinning down any reliable information as to his whereabouts and well being. Cartoonists Rights Network International, trying to draw attention to his plight and put pressure on the Syrian government, gave him the 2013 Award for Courage in Editorial Cartooningin absentia — just as they bestowed this year’s prize on currently-imprisoned Iranian cartoonist Atena Farghadani.

Rumors of Raslan’s death circulated in 2013, only to be contradicted shortly thereafter by other reports that he was still alive. In light of mounting evidence that the original rumors were tragically accurate, his friend and fellow cartoonist Fadi Abou Hassan has posted his own tributes and some of Raslan’s pieces on Cartoon Movement this week. Abou Hassan was also arrested and tortured as far back as 2009, before the war began. With CRNI’s help, in 2012 he fled Syria for Norway where he still lives today. Ali Ferzat, yet another cartooning Assad critic, also left Syria for Kuwait after militia members beat him and broke both of his hands in 2011.

According to the NGO Reporters Without Borders, Assad’s government still holds at least 30 journalists and bloggers in custody, while a further 29 are missing or held by Islamic State and other armed rebel groups in Syria. RWB’s Alexandra El Khazen deplored Raslan’s reported death in a statement issued today: