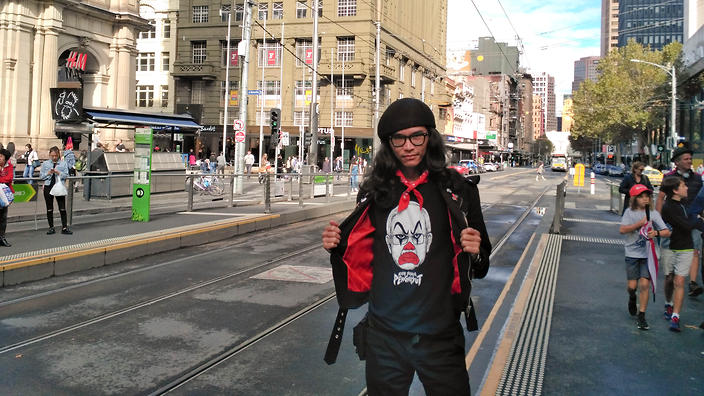 Fahmi Reza, the Malaysian graphic designer and activist who is currently facing sedition charges for depicting Prime Minister Najib Razak as a clown, took his message of resistance to Malaysian expatriates in Australia last week. Even as his case is pending before a court in Malaysia, he exhorted his fellow countrymen and women to “continue and never stop pushing” against government corruption.

Fahmi originally posted the clown image on Instagram in January 2016 as a protest against Malaysia’s Sedition Act which has been used against critics including political cartoonist Zunar, currently facing up to 43 years in prison for statements he made on Twitter. Fahmi’s post read: “In 2015, the Sedition Act was used 91 times. But in a country full of corruption, we are all seditious.”

Shortly thereafter he was notified that he would be charged under the very same Sedition Act, which he has defiantly dubbed the “Hurt My Feelings Act.” He also faces a separate charge for digitally altering a Malaysian government takedown notice which he used in a satirical post on Facebook. Each count carries up to two years in prison and a fine of 50,000 Malaysian ringgit, or about $12,300.

Like Zunar, Fahmi was banned from travelling out of the country while his case was pending. His travel ban was lifted earlier this year, however, while Zunar’s remains in force. Fahmi was invited to Australia by the expatriate group SABMOZ, which encourages Malaysians of all ethnicities, religions, and classes to “engage in the discussion and advocate remedies to social, economic and political issues plaguing Malaysians.”

Fahmi was inspired to create the Najib clown in the midst of the 1MDB scandal, as it was revealed that the Prime Minister allegedly diverted $700 million from a government investment fund into his personal bank account. Much like Zunar who says that cartoons are the perfect medium for critiquing Malaysian politics because the country is subject to a “cartoon government,” Fahmi felt that Najib’s corruption made his homeland into a laughing stock for the whole world. Apart from sharing the clown image online, he and others have also pasted it on walls throughout Kuala Lumpur and other cities, accompanied by the hashtag #KitaSemuaPenghasut or #WeAreAllSeditious.

Our government officers – who pays their salary? It comes from taxpayers’ money, our own money. And they are there to represent the people. As representatives they should accept different forms of feedback and criticism from people they supposedly represent.

If convicted on the two charges, Fahmi could face up to four years in prison. His trial, again much like Zunar’s, has already been pending for over a year and probably won’t be resolved for some time.