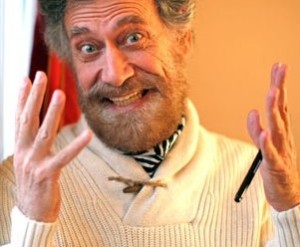 Ferzat displays his healed hands after the attack that was meant to stop his drawing.

Five years ago as the Arab Spring swept through the Middle East, Syrian political cartoonist Ali Ferzat sensed a tipping point when it became his responsibility to help “break people’s fear,” in his words. Whereas his cartoons previously relied on oblique symbolism to get his message across, he instead began to draw direct caricatures of the figures he mocked–including President Bashar al-Assad. Ferzat’s boldness was rewarded in August 2011 with a severe beating at the hands of Assad’s secret police, who pointedly broke both of his hands to stop him from drawing.

Ferzat did not stop, but he was forced to flee Syria for Kuwait, where he still lives today. In a recent interview on the French website Télérama, he discussed freedom of expression, the power of cartoons, and the attendant responsibilities of cartoonists in opposing dictators.

The Arab Spring certainly was not the first time Ferzat landed on the Syrian government’s bad side. Over a decade earlier in 2000, he took advantage of an eight-month “thaw” in censorship after the death of the current president’s father Hafez al-Assad, starting a weekly satirical magazine called al-Domari (The Lamplighter). The publication met with great success, selling out of the 75,000 copies printed for each issue.

At that time, Ferzat still didn’t dare to depict any real figures from the Syrian government in his work, instead employing symbols such as sunglasses to represent the secret police. This gave him a certain amount of plausible deniability, he recalls, since “if my drawings caused me problems, I could say that it was about Pinochet [in Chile] or whichever dictator, but people in Syria knew what I was really talking about.” Nevertheless, the regime soon shut down al-Domari.

Eleven years later as the uprisings in other countries inspired Syrians to mount weekly Friday protests against their own government, Ferzat abandoned the symbols and became the first cartoonist in the country to actually draw Assad. Soon his cartoons were brandished in the streets as protest signs. The final straw before the beating by Assad forces may have been a panel that suggested the Syrian president should hitch a ride out of town with Libya’s Muammar Gaddafi.

The fact that his attackers particularly made sure both his hands were mangled is no coincidence. “They slit the throat of the singer Ibrahim Kachouch, who wrote satirical songs about Bashar al-Assad, and tore out his vocal cords,” he recalls. “With me, they broke my hands so I wouldn’t draw anymore.” Instead, he resolutely continues to draw in exile, remaining the best-known political cartoonist in Syria. Last year he relived the horror while watching the aftermath of the Charlie Hebdo attack, he said:

I saw the images on TV and I was overcome. I felt such sadness, such bitterness, that I needed to draw to work through it. One of my first drawings showed a pencil shot from a bow landing in the chest of ISIS.

Even as he continues to watch the chaotic situation still unfolding in Syria–where he hopes to return someday, especially as most of his original works are hidden there in a secure location–Ferzat remains convinced that political cartoons hold the key to resistance for the Syrian people:

My caricatures are nothing less than a call for a democratic Syrian state built on justice and law. I think drawing is the strongest weapon against the regime because it allows us to expose its lies and re-establish the truth.

Ferzat’s current cartoons, many of which are wordless or at least comprehensible to non-Arabic speakers, can be found here on his Facebook page.