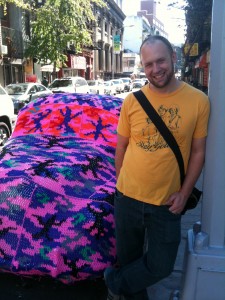 To help fund its fight for Free Speech, CBLDF relies on many people, including the retailers who keep us in comic books and graphic novels. Retailers support us by becoming members, leaving a collection can on the counter, and putting on events in their stores to benefit CBLDF. 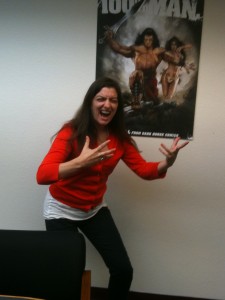 In the case of Things From Another World’s Senior Director of Retail Operations Andrew McIntire and Marketing Manager Elisabeth Forsythe, helping CBLDF has become an obsession. Three years ago, they launched an annual campaign to collect original art donations for CBLDF’s auction at Comic-Con International, helping the Fund raise thousands of dollars in the process. Each summer, they dedicate themselves to soliciting and gathering donations from comics creators around the world, making sure CBLDF has an amazing array of original art up for bid. From this art, they make a series of autograph cards that both promote the auction and CBLDF.

McIntire and Forsythe are both diehard comics fans, with a knowledge of and love for the medium that few can stand up to. They’re off to a good start with this year’s auction, as you can see here, and we took a moment to talk to them about CBLDF and their perspective on Free Speech as retailers in this edition of The Good Fighters.

CBLDF: How were you introduced to the CBLDF?

Andrew McIntire: I first became aware of the CBLDF in 2008. Although I’ve been a lifelong fan of comics, I didn’t learn there was an organization dedicated to defending the First Amendment rights of the medium I love until then. From the moment I learned about the Fund’s mission, I began looking for a way that Things From Another World (TFAW.com) could use our size and reach to help promote the important work the CBLDF is doing. In 2009 we hit upon the autograph card idea and have been working to support the CBLDF’s annual auction ever since.

Elizabeth Forsythe: I was introduced to the CBLDF in 2009. We had originally played with the idea of producing one or two autograph cards for SDCC for promotional purposes. Instead, we created more than 24 cards, with all of the original artwork going to the CBLDF auction in San Diego.

McIntire: Simply stated, even ideas that benefit the whole of the human race can be unpopular with some segment of the population—to the extent that they will seek to suppress these ideas rather than let them be heard. As a race, humanity has the gift and responsibility of being able to evaluate ideas with objectivity, including those we find offensive and ultimately choose not to accept, and embracing the best of them for the betterment of the whole. The First Amendment is a fundamental part of safeguarding that process in the United States and is a core precept of this nation.

Forsythe: It’s important to be able to communicate opinions and ideas, even if they’re controversial or unpopular. A big part of what it means to be free includes freedom from oppression and the whims of any particular mindset or movement.

CBLDF: Have you ever had to deal with challenges to the books you shelve at TFAW? How did you defend the books?

McIntire: We have not faced direct challenges of this sort, but many retailers, collectors, and fans of comics have. The CBLDF has provided support and assistance to the comics community in many of these cases, and we’re glad to add our voice to the supporters of this mission.

CBLDF: TFAW is one of the largest online retailers of comic books and graphic novels. What’s your take on the laws restricting the posting of images and content online? Do these laws impact how TFAW does business?

McIntire: These laws do not directly affect the way TFAW does business, given we serve an All-Ages customer base and make decisions based upon the responsibility that entails. By this I mean that I believe that parents have a right to expect that when they allow their children access to an All-Ages site, there will be some reasonable measures in place to regulate underage access to mature content, and that if you are engaging the public as a family-friendly business, you assume certain responsibilities to safeguard that trust. With that in mind, while TFAW does offer some Mature 18+ material, we voluntarily refrain from showing explicit imagery on our site. However, that’s the key point right there—we make this decision ourselves out of consideration for our younger visitors, and we would embrace that policy whether there were laws restricting content or not. That’s our decision as a family-friendly business, but it doesn’t mean it’s the right decision for everyone, nor do I believe that responsible adults should have these decisions made for them by the government.

Forsythe: In terms of any comic book previews we post, we only post images that have been approved by the publisher or owner or those that are already available to the public.

CBLDF: You started soliciting donations to benefit the annual CBLDF auction at SDCC three years ago. What motivated you to take on this responsibility?

McIntire: The CBLDF’s mission is close to my heart as both a comics retailer, and as a firm believer in the First Amendment rights of Americans. Our efforts to support the CBLDF auction at SDCC are just a way of doing our part to help support the fund’s mission. Besides, the hard work aside, it’s a great opportunity to see some amazing original art from some of the best creators in the business up close and personal—so for a comic fan like myself, that’s a pretty great perk to boot.

Forsythe: I had, frankly, not been well informed about the challenges the comics community still faces in terms of litigation. I had assumed that those oppressive attitudes were a thing of the past. When we started working with the CBLDF, and I learned that comic book retailers and fans are still prosecuted for owning or distributing “obscene material,” it really offended me. It makes me want to help raise as much money and support for the CBLDF as possible.

CBLDF: Has your work with CBLDF influenced how you display and promote books? How so?

McIntire: Yes, but probably not in the way some might think. Our love of comics of all sorts has always meant that we offer a variety of titles, including those tackling controversial subject matter. However, through our work with the CBLDF, we’ve had the opportunity to meet dozens of amazing artists, some of whom we previously were unfamiliar with, and carry their independent titles at TFAW.com and in our brick-and-mortar stores.

McIntire: I think that I’ve stressed the patriotic and ideological reasons already, so for those retailers unmoved by such concepts, let me close with the strictly mercenary. Because whether you know it or not, the work being done by the CBLDF is relevant to you, your business, and your customers. And I don’t mean this in the abstract: the Supreme Court passed a 7-2 decision denying state-requested restrictions against violent content in video games in Brown v. EMA. The CBLDF was actively opposed to this law, and arguments presented in the CBLDF’s brief were cited in the Court’s majority decision. Had this law stood, it would have set a precedent for all media by making violence a new category of unprotected speech. Now take a look at your shelves and imagine what it would look like if you had to remove each and every title whose narrative included a fistfight, firefight, mighty battle between hero and monster, alien invasion, or any of a score of other scenarios that are violent in nature. Not a pretty picture, is it? Join the CBLDF, show your support, and contact them to see how you can help defend First Amendment rights and spread awareness of the CBLDF’s mission to your customers. The argument to restrict what you can sell, something that fundamentally effects your business, is going on right now, whether you’re aware of it or not.

Forsythe: If you don’t get involved in supporting the First Amendment until it negatively affects you personally, it might be too late–there may not be anyone left to speak for you. We need to build strong foundations now that will support the comics community far into the future. As far as getting involved, joining the CBLDF is always a good start.

Please support the CBLDF’s defense of Free Speech by making a donation or becoming a member today!