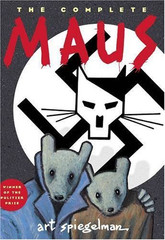 On the occasion of the twenty-fifth anniversary of its first publication, here is the definitive edition of the book acclaimed as “the most affecting and successful narrative ever done about the Holocaust” (Wall Street Journal) and “the first masterpiece in comic book history” (The New Yorker).

The Pulitzer Prize-winning Maus tells the story of Vladek Spiegelman, a Jewish survivor of Hitler’s Europe, and his son, a cartoonist coming to terms with his father’s story. Maus approaches the unspeakable through the diminutive. Its form, the cartoon (the Nazis are cats, the Jews mice), shocks us out of any lingering sense of familiarity and succeeds in “drawing us closer to the bleak heart of the Holocaust” (The New York Times).

Maus studies the bloody pawprints of history and tracks its meaning for all of us. This modern masterpiece is signed by the author on a specialty bookplate.

Get your copy today!