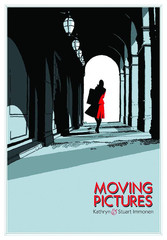 During World War II, the Nazis pillaged much of Europe’s great art collections. Museum curator Ila Gardner and SS officer Rolf Hauptmann are forced by circumstances to play out an awkward and dangerous relationship in a public power struggle. Moving Pictures unfolds along two timelines which collide with the revelation of a terrible secret, an enigmatic decision that many would not make, and the realization that sometimes the only choice left is the refusal to choose. This softcover edition is signed by creators Kathryn and Stuart Immonen.

Pick up your copy today!