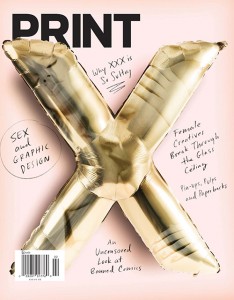 The February 2014 issue of Print Magazine — the Sex & Design issue — is a natural fit for a discussion on comics censorship because sexual is content is the dominant reason comics are challenged and banned. In the issue, journalist Michael Dooley takes a look at contemporary comics censorship with “An Uncensored Look at Banned Comics.” CBLDF’s work in defense of comics is featured predominantly in the article.

While the full article is only available in the print edition of the magazine, Dooley has been sharing excerpts on the Print website. The first, “Schools and Libraries Giving Comic Books the Boot” ran last week. In the article, Dooley Lists just a few of the comics that have been challenged — sometimes successfully banned — in libraries and schools. Dooley’s second web excerpt, “Mike Diana: Obscene Godfather of Internet Rage Art,” discusses the artwork of Mike Diana, who CBLDF tried — unsuccessfully, regrettably — to defend against an obscenity conviction:

But [cartoon archivist Ethan] Persoff says, “There’s no obscenity in his work, at all. If it’s obscene it’s only obscene for being vomited-out subconscious or adolescent-themed imagery.” Nevertheless, as part of his sentencing, Diana tells me that “I was ordered not to create art. The police were allowed to conduct warrantless, surprise searches to check. I lost my appeal, and the U.S. Supreme Court wouldn’t hear my case. So I have to live with the injustice Florida did against the First Amendment.”

Check out Dooley’s excerpts here and here. His full article can be found in the February 2014 print edition of Print Magazine.