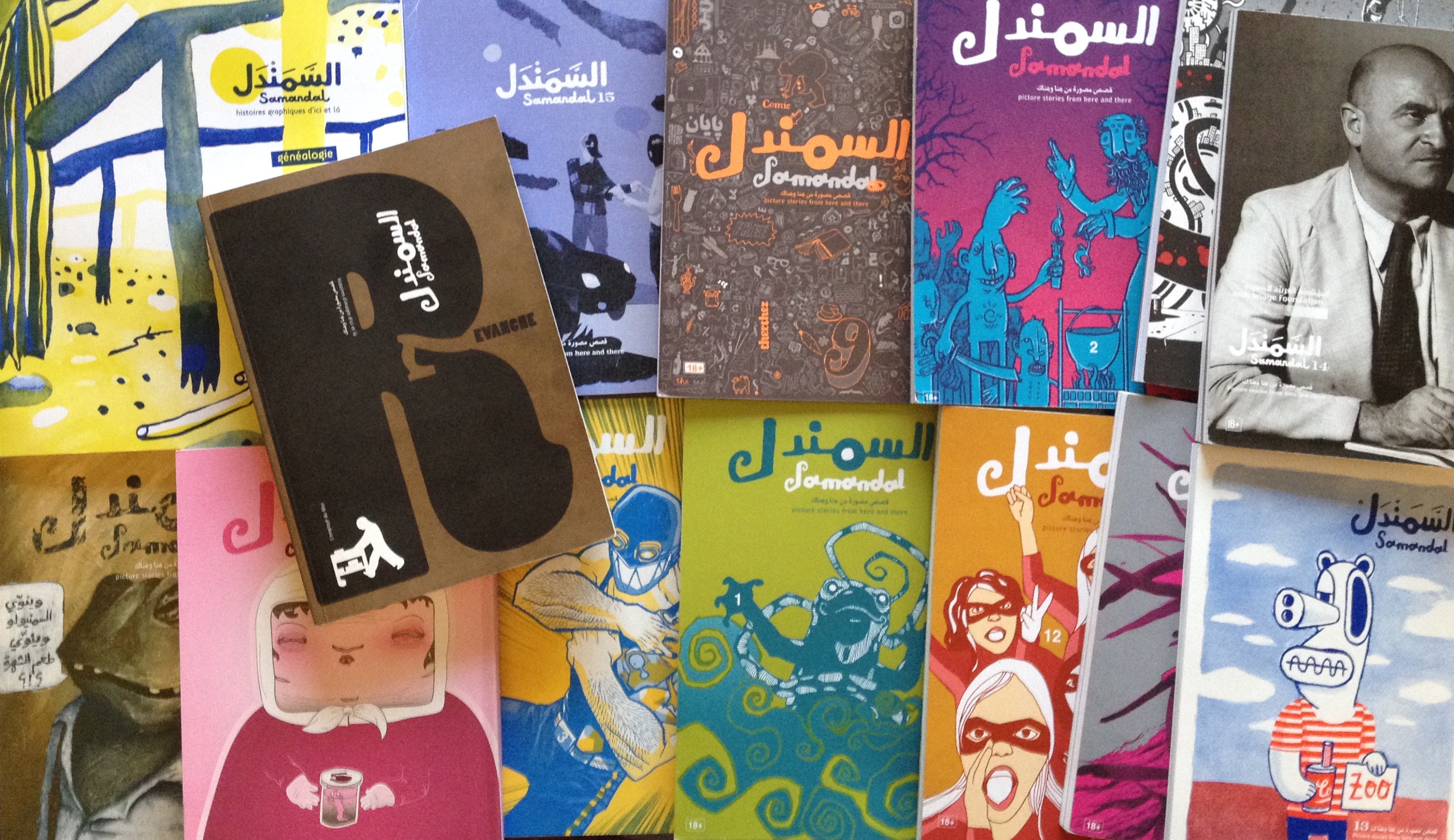 The Lebanese indie comics collective Samandal, financially crippled after three of its editors were fined a total of $60,000 for charges that include “inciting sectarian strife” and “denigrating religion” through comics, this week turned to crowdfunding in a last-ditch effort to survive. With its Indiegogo campaign, the association hopes to finance its next two annual anthologies, an online archive of back issues, and the hiring of a part-time coordinator.

In a statement on their website, the members of Samandal laid out their original mission:

We began Samandal as a volunteer-based, non-profit organization in 2007 because we felt that comics were an underrepresented medium in our part of the world. We wanted to create a platform to tell stories from Lebanon and the Middle East, as well as to bring independent comics from around the world to a local audience. Alongside publishing comics, we also organized countless workshops, comics jams, international artist exchanges, and lectures, opening up the dialogue to include artists from different disciplines, and along with Metropolis Art Cinema have co-founded Beirut Animated, the biennial animation festival in Beirut.

Samandal’s success was curtailed in 2009, however, when unnamed “Christian personalities” formally complained about two comics that they found religiously offensive: “Lebanese Recipes for Revenge” by Lena Merhej (also a Samandal editor) and “Ecce Homo” by the French creator Valfret. In their statement, editors pushed back against the notion that they have anything against Christianity in particular:

The assumption that we built a platform such as Samandal to take cheap shots at religious institutions is absurd, and the richness of our publications speaks for themselves. We respect all religions equally and have no interest in targeting any single one for ridicule. However, we have no respect, and in fact much contempt, for those who use religion as a way of exercising their power and tightly policing public discourse.

The assertion that Samandal is insulting the Christian faith is an attempt to pit Samandal against Christianity and religion as a whole, when in fact it is a few individuals in power who are purposefully misreading the work in order to monopolize the conversation and deflect from their own incompetence at state legislation and their own incitement of sectarian strife when it suits them to do so. It is an unfortunate irony that a non-profit publishing platform for comics was prosecuted for “crimes” that continue to be committed daily by various politicians and their respective news outlets. Religion has been wrested from the hands of worshippers and into the chokehold of state institutions, stifling conversation and reducing all debate to a reductive binary of “with us or against us.” We refuse to be a part of that exchange. In fact, Samandal was created precisely to provide an alternative space for a different kind of dialogue, one much richer in language and nuanced in its discussions of the subtleties of the world around us.

Nevertheless, three editors — Omar Khouri, Hatem Imam, and Fadi Baki — were personally charged with separate counts of “a) inciting sectarian strife b) denigrating religion c) publishing false news and d) defamation and slander.” After a valiant but fruitless five-year court battle, they each received a $20,000 fine in April 2015. With their coffers emptied out by the penalties — likely just as authorities intended — they regretfully announced in their statement that the upcoming Geographia will be their final publication unless the crowdfunding effort is a success. Check out the Indiegogo campaign here. Perks include back issues of Samandal anthologies, which are available in English, Arabic, or French.