Our neighbors and friends at IDW: PDX are putting together their second issue of Full Bleed: The Comics & Culture Quarterly. The Kickstarter funded, hardcover magazine is curated and edited by IDW’s Dirk Wood and Ted Adams — who joined CBLDF’s Board of Directors in February of this year. They were kind enough to share a first look at the in-depth interview Derek Royal and Andy Kunka, hosts of The Comics Alternative Podcast, did with comic legends, the Hernandez Brothers. 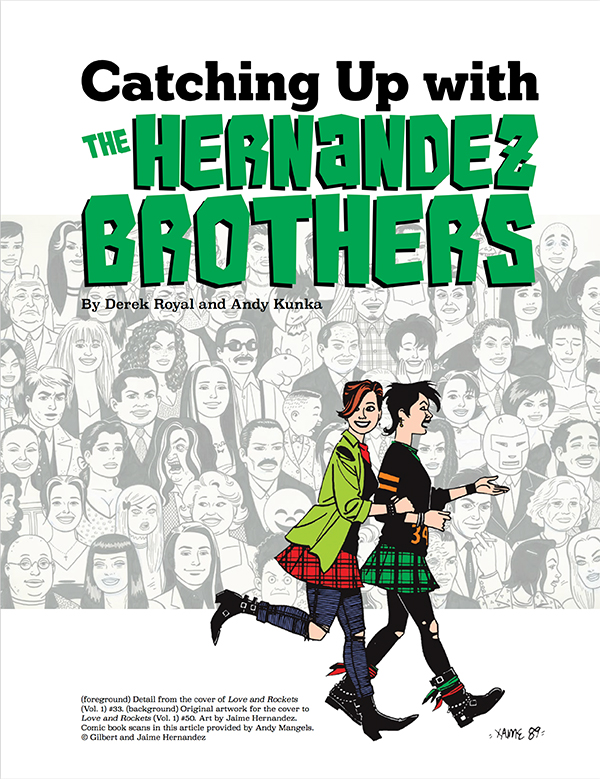 Catching Up with the Hernandez Brothers

By Derek Royal and Andy Kunka

Derek Royal: I don’t think that any introduction is needed, really, when it comes right down to the Hernandez brothers, but for those who are unfortunately uninitiated, we’re here with Gilbert and Jaime. They are the team behind Love and Rockets. The first issue was self-published in 1981, so basically now we’re looking at over 35 years in terms of an anniversary of the comic. It’s a title that’s been around, in one form or another, since then, as have the characters the brothers created. So they definitely have some longevity, and we want to talk about that longevity today.

Andy Kunka: One of the places to start with, I think, is actually some of the more recent developments with Love and Rockets since, as I just showed, we have the first issue of volume 4. Two issues of that are out so far. If you could talk about it, first of all: Why switch the New Stories annual book to the magazine size again?

Jaime Hernandez: Basically, from my end, because the annual was driving me crazy. [Laughter] Sitting with fifty pages for a year drawing this thing, an issue, for a whole year started to mess with me. I started to rewrite scenes that didn’t need rewriting because I thought they were old. [Laughter] A lot of things like that. But also, we wanted closure more often. We missed having an issue out, and shortly after that another issue. It’s kind of like this: The annual had its strengths. It helped me write some of my more favorite pieces because I had space to do it, but then, on the other hand, I was saying it was kind of messing with me psychologically. So, kind of trying to decide, well, what do we want? Our sanity, or the ability to write longer stories?

Gilbert Hernandez: Yeah, The Love Bunglers was done in an annual. There are a lot of good things about the annual. I could do long stories, and I could do throwaway stories that were long. Normally, my throwaway stories are three or four pages. I could actually have a twenty-page throwaway story. Which was fun for a while, like Jaime said, but then it starts to work on you. And then I realized I was only doing a cover of Love and Rockets every two years. That, psychologically, was kind of like, “What?! How?! How do you mean?” It didn’t work. I’m not crazy about doing covers, but I like having them out. You know, when you’re a kid…well, when we were kids, you’d see comic books, there’s so many comic books coming out, and they came out so fast. Luckily our older brother [Mario] was collecting them – let’s say, the X-Men or something (and I’m talking about Kirby’s X-Men) – that there’d be so many that I would miss issues just because they came out so quickly. But since he collected them, we could go back to them, rediscover what we missed. That was just ingrained in us, new covers, a new issue coming out periodically. It’s just more fun! Love and Rockets is still a comic book. We’re not New York Times bestseller guys, we’re not trying to impress anybody with, I dunno, trying to knock down the Big Two. They’re doing just fine on their own. [Laughter] It’s just more fun to do. The only thing that’s a little rough is, as soon as we finish an issue, dot the last I, we have to start on the next one. [Laughter] That’s a little something. But I’m pretty much caught up right now, so I think it shouldn’t be too hard for a while.

Royal: That’s interesting. One of the things that Andy and I were discussing just yesterday is that what’s unique about this transition from your annual into the fourth series, the new magazine format, is that you’ve really done something that you haven’t done with other series changes. So from the first magazine [beginning in the 1980s], and then several years later into the comic-book-sized second series, you cut off the storylines, for all practical purposes, at the end of the first Love and Rockets run, and then picked up with new storylines in the second series. And the same thing happened between that second series into the annual. But with the annual evolving into the new magazine, you guys continued with the storylines you were already working with. I’m curious if there were any challenges in going from the annual format to the new magazine, in continuing those same storylines, for each of you?

Gilbert: Only for the readers. [Laughs] Because what we were working on was the next annual, so we just broke it up. For us it was easy. I know it’s difficult for readers. Your homework is to read the previous issues! [Laughter] We actually discussed that, though: Should we just start new stories to ease readers into it? The point was that we were just going to go back to those stories anyway. Otherwise, we would have been pushing those stories back again, and I just didn’t want to do that. I wanted to get through these stories. I made a few shifts, I took a big hunk of what I was planning on and moved it to a different comic-book format. It just didn’t fit in the Love and Rockets annual. Love and Rockets now, since we only have sixteen pages each issue, there’s not much you can do. So I had to take out a lot of stuff that was originally planned for the annual. So I’m putting those stories into a new series called Psychodrama Illustrated. It’s basically the continuation of the Fritz stories. I’m having difficulty winning people over with it. [Laughter] The readers have a real hard time with her stories, but I still gotta do them. I got them planned, I think they’re good stories, but they belong somewhere else. It creates more work for me, but at least Love and Rockets is free, so I can just move some of the more difficult things out and smooth it out. We just finished issue #3, and already with issue #4, I’m starting anew. So that’s cool.

Kunka: If the Fritz stuff is moving into Psychodrama Illustrated, what’s staying in Love and Rockets?

Gilbert: I don’t know if you guys have been following the storyline, but Fritz has two daughters that she had through a surrogate, one of whom she didn’t even know about. So that was the little soap opera plot there. But I have to finish that, because I have to introduce the girls to be continuing characters. So now what do I do? I move Fritz out along with one of her daughters, and the one that we didn’t know about, that Fritz didn’t know about, is going to probably dominate the new Love and Rockets series. She’s going to be a connection to the readers who were joining Love and Rockets late. She doesn’t know what’s going on, and it’s about her figuring out who everybody is and what everything’s about and how she’s connected as in family. That’s what it’s mostly going to be about. I have this fantasy: I really want to return to, basically, two people talking in a room, which is one of Love and Rockets’ strengths.

Royal: So is the newly discovered daughter of Fritz, is she going to be the way you described her, a stand-in for the reader who may not be familiar with your work in Love and Rockets?

Gilbert: Yeah, the character Killer was originally going to be that, but there are not a lot of people who are going to relate to her. She’s so superhumanly beautiful [Laughter] that it’s like she’s a different type of character. She’s still in it, but I’m moving her in a different way. Whereas this other character can be just about anybody. Yeah, she is naive. She has no idea what’s going on, so she’s sort of a stand-in for the new readers. Hopefully! It always gets complicated.

Kunka: Jaime, I was going to ask you, then, about your current stuff. You have three ongoing storylines: Princess Anima, the punk reunion, and the ongoing saga of Vivian and Tonta and their family. Are these three narratives going to be coming together at some point, or are they going to be remaining separate stories that will go on in Love and Rockets?

Jaime: Probably as standalones. They all stand alone. Like Gilbert was saying, when we went to the magazine, I wasn’t done with my stories. I didn’t want to cheat myself or the reader and just cut them off. I had a long-range plan for the punk reunion. It’s winding down, but it’s still going to take until at least issue #4 or #5. The Tonta stuff is just fun. Something happens and then it ends. [Laughter] Each story has an ending, which I kind of like. It’s like a Betty and Veronica story in old Archie comics. The Princess Anima was planned to be my screw-the-continuity-I-wanna-have-fun thing. As much as the Maggie and Hopey stuff is very important to me, it’s very restricted in real life and the timing of real life. Princess Anima is just me going, “I wonder what’s going to happen next? Okay, a monster’s going to try to cut her head off.” [Laughter] “She’s gonna cut someone’s head off, she’s going to drink their blood.” Okay, fine! I’m having a lot of fun. It’s kind of a release when I put the Maggie and Hopey stuff aside for a while. It’s so bogged down in continuity and character and serious plot and stuff. The Anima story, more than the Tonta stuff, is just, “Let’s see what happens! Let’s go! Draw something fun!”

For the full interview, you’ll have to head on over to Kickstarter and reserve your copy!

In a universe with the internet increasingly at the center of it, there is something special about a beautiful periodical full of not only comics, but prose, art, film, politics, fandom, and the culture that surrounds it all. Full Bleed Vol. 2 is expected to ship this July. To check out more of what’s in store for this issue and the different backer incentives they are offering, visit their Kickstarter page.

← CBLDF Reception for The Art of MARCH
Comic & Graphic Novel ALA Group Needs Your Help! →