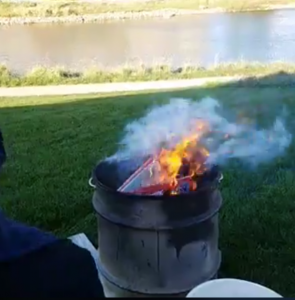 Paul Dorr, the leader of an anti-choice, anti-LGBTQIA group called Rescuing the Perishing, posted a video of himself on Facebook Live burning children’s books borrowed from the Orange City Public Library in Iowa. According to the Sioux City Journal the books burned were David Levithan’s Two Boys Kissing, Gayle E. Pitman’s This Day in June, Christine Baldacchino’s Morris Micklewhite and the Tangerine Dress, and Suzanne and Max Lang’s Families, Families, Families!

In an interview with the Journal, Dorr explained “his protest was the result of his outrage at several things in Orange City and in the region. The events of OC Pride, a local LGBTQ festival, were, in essence, the straw that broke the camel’s back for Dorr. Dorr cited, among other things, sexual education classes in schools (which he would only refer to as “classroom sex talk,” and which he would like to see eliminated in favor of a Biblical, marriage-based curriculum); some local churches’ reticence to combat homosexuality; and Northwestern College — which drew his ire partly when it staged a play that portrayed homosexuality in a not-unfavorable light — all as contributing factors to his protest. ”

Pinknews.co.uk reports that as Dorr dropped the books into the fire, he commented on them,

“Dropping the copy of Two Boys Kissing into the fire, he said: ‘That one won’t be going on the shelf anymore!’

Throwing This Day in June onto the fire, Dorr added: ‘Orange City library, you will not be checking that one out to kids.’

Explaining his actions, Dorr said: ‘I cannot stand by and let the shameful adults at the Orange City Library Board bring the next group of little children into their foul, sexual reality without a firm resistance.”

These comments sound directly related to the uproar in Orange City back in February when a group call Sioux County Conservative sent out flyers accusing the library of indoctrinating Pre-K children in the community, and claiming that LGBTQIA people have higher rates of cancer, alcoholism, domestic abuse, and other statistics taken out of context for their own purposes. The flyer had three pictures of books it recommended be sequestered from their regular sections on the top of the flyer, Two Boys Kissing, This Day in June, and Morris Micklewhite and the Tangerine Dress. In response the library reorganized the way the books were presented, so they were by subject instead of alphabetical by author. The uproar had started when someone complained about Two Boys Kissing being visible on a shelf.

After Dorr burned a copy of Morris Micklewhite and the Tangerine Dress, he pulled an actual tangerine dress from his bag and burned that too.

According to The Des Moines Register, Mark Stringer, the Executive Director of the ACLU of Iowa, said in response to the video “Frankly, I found it disgusting. We are disturbed to see this. Burning books from a public library is a clear attempt to shut down the open sharing and discussion of ideas. It’s one person, or maybe a group, deciding that they’re the gatekeeper of ideas for the rest of the public.”

“Amanda Vazquez, the library’s director, said she learned of the video on Saturday. The library “alerted the board” and spoke with authorities to determine “next steps,” including possible legal action, Vazquez said.

Around the same time as the video was posted online, Orange City Public Library was also fighting with some conservatives in the community over the children’s book A Day in the Life of Marlon Bunco popularized by the show Last Week Tonight with John Oliver. What started out as a spoof of a book about Vice President Mike Pence’s pet rabbit, the best-selling children’s book has actually received top marks from reviewers across the board, School Library Journal called it “An affirming book for children that goes beyond the adults-only type of parody titles that have gained popularity in recent years.” And The Star-Ledger wrote “This is a spectacular children’s book, one that stresses the most important lessons of love, democracy, and acceptance…I won’t wreck the ending, but I will say there is good reason to make this a bestseller. Any children’s book that can move me to mist up because, ultimately, love does conquer all, is a book worth sharing.”

In the end, the library retained the book, as part of their continued efforts to represent the wide range of interests and identities in their community with a library catalog equally as diverse. After this decision to keep the book was announced, the Sioux County Conservatives, the same group who sent the hateful flyers out in February, sent a statement to the local news station saying, “We are very disappointed that the library board did not allow public comments today. The board needs to hear from the community the library is supposed to serve. This is an embarrassment for Orange City and a significant disservice to the taxpayers.”