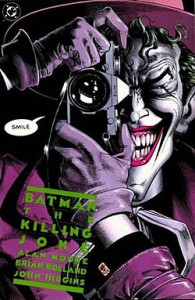 Batman: The Killing Joke, a one-shot comic written by Alan Moore and drawn by Brian Bolland, depicts Joker’s violent torture of Jim Gordon and his daughter Barbara. It had a profound influence on the Batman universe’s continuity, introducing Barbara Gordon’s shooting and subsequent paralysis and opening the door to her transition into the character Oracle.

In May 2013, a patron of the public library in Columbus, Nebraska requested that the book be removed from the collection, claiming that it “advocates rape and violence.” Three out of five library board members were present at the meeting where the challenge was considered and voted unanimously to retain The Killing Joke on shelves. In 2010, Batman: The Dark Knight Strikes Again by Frank Miller and Lynn Varley was similarly challenged and retained in Canton, Ohio.

The Killing Joke joins Watchmen, The League of Extraordinary Gentlemen: Black Dossier, and Neonomicon on the list of banned/challenged comics by Alan Moore.

Download a PDF of The Killing Joke discussion guide here.