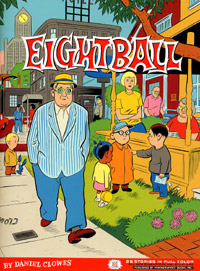 In 2008, Guilford, Connecticut high school teacher Nate Fisher was forced to resign from his job after a parent filed both a formal and a police complaint against him for lending a high school freshman English student a copy of Eightball #22, which was later published as the graphic novel Ice Haven.

Ice Haven is composed of a series of vignettes that describe the life of the small town and its citizens after the disappearance of a local boy.  Recommended for Grade 10 and up by School Library Journal, the book explores the emotional lives of a large cast, including a schoolyard bully, a love-struck teenager, an emotionally troubled child, a frustrated poet and the classmates of the missing boy.  Clowes employs a variety of cartooning styles to render the sensibilities of his different characters, creating a rich, blackly humorous tapestry about the alienation, loneliness, guilt and desire.

When a transfer student arrived at school without having the opportunity to perform her summer reading assignment, Fisher gave her the option of choosing a book from his classroom library to read over the Labor Day weekend to make up for the missing work.  The student chose the Clowes book.  Fisher approved the choice, but warned the student that it contained mature content. Clowes’ book contains profanity, course language and brief non-sexual nudity, and while it was not on the school’s summer reading list, its content is comparable to books by authors recommended by the school, including Charles Bukowski, Augustyn Burroughs, Diane DePrima, Allen Ginsburg, and Sylvia Plath.

The student’s parents objected to the book being assigned and immediately filed complaints with the school and the Guilford police who opened a criminal investigation.  The parents also went to local media and alleged that the teacher gave their child a pornographic comic, insinuating a potential predatory motive. Fisher was placed on administrative leave and resigned a week later.  A news story appearing in the New Haven Register quoted the girl’s father regarding the school’s acceptance of Fisher’s resignation as “a cop out.”  He told the paper:

“Now they don’t have to worry about it,” he said. “They can close the investigation, they’re done with the matter and now they’re out of a sticky situation.”

“I personally don’t ever want him teaching again,” he said. “There is nothing that he could say that would account for this. … That poor judgment is something you can’t take back.”

Ultimately, no criminal charges were brought against Fisher.

Download a PDF of the Ice Haven discussion guide here.