The Comic Book Legal Defense Fund was formally incorporated as a 501(c)3 not-for-profit organization in 1990, shortly after our efforts had successfully overturned the conviction of comic store clerk Michael Correa in Illinois.  The CBLDF’s earliest efforts tended towards assisting retailers when they were intimidated by local authorities for the contents of the comics they sold.  In this period, CBLDF would frequently become involved in quashing cases by deploying letters and phone calls from qualified attorneys to the persecuting authorities.  In the majority of those cases the investigation would come to a prompt and positive end.

However, the new threat that the organization faced in its earliest days involved a distressing trend showing authorities censoring artists.

The Taxman As Censor: The California BOE v. Paul Mavrides 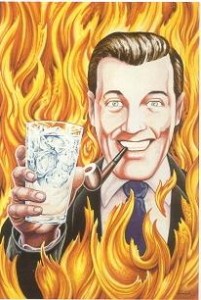 Paul Mavrides may be best known for his subversive counter-culture cartooning in the service of the Church of the Subgenius or as the co-author of the Fabulous Furry Freak Brothers, but he never expected to encounter a controversy when filing his taxes.  But that was exactly what happened when the California State Board of Equalization scrutinized his tax return and determined that the original art he sent to publishers to be shot for publication was not an author’s manuscript, but a taxable good.  On principle, Mavrides fought back.

The Board of Equalization (“BOE”), California’s state taxing authority, registered Mavrides as a vendor. When he sold original pieces of his artwork to clients, he charged sales tax on the transaction, which was then paid to the BOE. In 1992, on his state tax returns for the 1990 calendar year, Mavrides listed his sales income and the tax owed. Also, he filed for a tax exemption for the royalty income for his comic work. This exemption was a standard in the comics industry and was based on his understanding that the work of an author, submitted for subsequent publication, was exempt from taxes since the sale of published work would ultimately be a taxable transaction, thereby resulting in double taxation.

The California tax authorities questioned Mavrides’ application of the exemption, to which he responded by explaining that he was the author of comic books, and cited the section of the tax code that exempts authors’ royalties.  The state rejected Mavrides’ assertion and billed him $1,036 in back taxes.  Mavrides requested a formal reconsideration and was again told that his work did not qualify for the exemption.  Greenberg writes:

The BOE asserted that the very nature of comics, which intertwine illustration with text, made them subject to taxation.  The implications of this determination on the mainstream comics industry are both profound and absurd.  This interpretation, applied to a typical superhero comic book would mean that the writer of the book … would not be taxed when he or she sent in his or her story to the publisher; but an independent illustrator or artist who drew or inked the same story, would be taxed on the submission of his or her work to the publisher.

After personally financing the dispute for two years Mavrides reached out to CBLDF for assistance.  Seeing the important implications of the case, the Board of Directors of the organization agreed to aid the artist.  CBLDF provided financial assistance and retained the services of a tax attorney to aid Mavrides.  The ACLU also lent substantive support in the form of an amicus brief.

For the next two years, the CBLDF supported team argued Mavrides’ case through many layers of state bureaucracy in a series of briefs.  Ultimately the case earned the support of a number of high-profile organizations and individuals who filed briefs in support of Mavrides after seeing how his case would have severe implications on their own work.  Finally, in 1996 the State BOE Board voted 3-2 that cartoon artwork was not subject to tax.

Obscene and Not Heard: The Tragedy of Mike Diana

Underground cartoonist Mike Diana was the first American artist ever to be convicted of obscenity charges and prohibited from making art. His work flows from an Underground Comix tradition harkening back to Rory Hayes, Greg Irons, and S. Clay Wilson’s deployment of a grotesque figures to produce graphic and often shocking comments on some of society’s most serious problems.  Diana was set up in a mail sting against his comics zine Boiled Angel. For three years he fought for his life – and lost.  Diana’s punishment prevented him from drawing in his own home and he was subject to spot checks to verify he wasn’t doing so. Diana’s case remains one of the most severe miscarriages of justice in the history of American art jurisprudence. 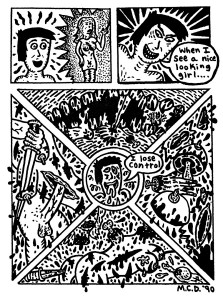 Diana came to the attention of law enforcement in 1991 when his photocopied mini-comic Boiled Angel was found in the possession of a suspect in a then-unsolved student murder case.  This brought Diana under the radar of the FBI who showed up at Diana’s mother’s house shortly after Christmas to question the artist.  Agents showed Diana copies of his comic, indicating similarities between his story and the murders made him a suspect in the case.  The agents requested a blood sample for DNA analysis, which ultimately ruled Diana out as a suspect.  The Federal agents then forwarded their file on Diana to Florida police.

In 1992, a Florida police officer initiated a correspondence with Diana, posing as a recent arrival to Fort Lauderdale.  Over the course of their 10-letter exchange, the officer won Diana’s trust through deceptive means, including lying about being a policeman.  The officer coaxed Diana to send copies of his comic, which were then turned over the the District Attorney who charged the artist via certified letter with three obscenity counts: publishing, distributing, and advertising.

In a week-long case in March of 1994, a Florida jury found Diana guilty of publishing, distributing, and advertising obscene material. They agreed that his work “lacked serious literary, artistic, political or scientific value” because it did not compare to such works as “The Grapes of Wrath” or Picasso’s “Guernica.”  Diana describes his harrowing experience in this interview with Richardson Magazine:

I was railroaded in court, the prosecution told the jury I was a suspect in the Gainsville murders even though the real killer was caught and had plead guilty just days before my trial started. They claimed that the art in Boiled Angel was made for killers and would turn people who read it into killers. At the courthouse the Boiled Angel books were on display for the public and even children to see, the Florida law says the public has the right to see material being charged, so Florida exposed my art to so many more than I could have ever dreamed of, not to mention they showed my comics on the prime time news on all stations. I was even on some TV talk shows about the case.

I was on the stand for over three hours to explain my art to the jury. I had a big stack of my old underground comics as exhibits to show them I was not doing anything new and that I had freedom of press but the judge would not let them be seen.

Diana was taken from the court house to prison where he waited four days to be sentenced.  He faced the prospect of three years in prison.  He was ultimately sentenced to a three-year probation period, during which time his residence was subject to inspection, without warning or warrant, to determine if he is in possession of, or is creating obscene material. He was to have no contact with children under 18, undergo psychological testing, enroll in a journalistic ethics course, pay a $3,000 fine, and perform 1,248 hours of community service.

Two appeals to the State Appellate Court failed to have the case reversed or reheard in Florida. During the first appeal process, the prosecution used evidence gathered after the original trial, a move usually considered unethical. The courts refused to accept an amicus brief submitted by the ACLU, and responded ‘without comment’ to the second and final appeal.

Two of the three counts under which Diana was convicted were endorsed by the Appellate Court. The only count that was judged incorrect was the conviction for “advertising obscene material.” The Court agreed with Diana’s attorney that it was improper to convict someone for advertising material that had not been created yet, since the artist could not, at the time, know the nature or character of the work.

In May of 1997 the CBLDF and the ACLU submitted a petition to the U.S. Supreme Court to hear Diana’s case. George Rehdart, a well-known First Amendment attorney, assisted in preparing the petition. The Supreme Court denied the petition “without comment,” thereby ending all possibility of overturning Diana’s conviction. 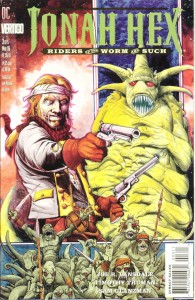 On May 1, 1996, the Comic Book Legal Defense Fund Board of Directors voted unanimously to support the First Amendment rights of Joe Lansdale, Timothy Truman and Sam Glanzman, by assisting in their defense against a civil complaint brought by musicians Johnny Winter and Edgar Winter in connection with the DC Comics series Jonah Hex: Riders of the Worm and Such.

According to court papers filed in Los Angeles County Superior Court on March 6, 1996, the Winters’ suit alleged defamation, invasion of privacy and related claims on two characters, the Autumn brothers, created for the comic book series by Lansdale and Truman. Attorneys Gail Migdal Title and Jeffrey Abrams of the Los Angeles office of Katten Muchin Zavis & Weitzman took on the defense of Lansdale, Truman and Glanzman. Title said, “This suit seeks to invade the right of artists and writers to free creative expression, a right that is protected by the First Amendment, parody and other laws. I am happy to assist the CBLDF in its fine work in the support of comic book professionals throughout the country.”

Lansdale and Truman were hired by DC Comics in 1993 to write and create the artwork for the comic book series. According to artist and former defendant Tim Truman, “From the creative standpoint, Jonah Hex: Riders of the Worm and Such was intended from the beginning as a work of fiction and parody.”

Joe Lansdale proclaimed, “It was our intent to use the Jonah Hex comic book series as a vehicle for satire and parody of musical genres, Texas music in particular, as well as old radio shows, movie serials and the like. We feel within our rights to parody music, stage personas, album personas, lyrics, and public figures.”

The following is the complete list of the plaintiffs’ claims:

DC ultimately defended Lansdale, Truman and Glanzman through its insurance company, relieving the CBLDF of that responsibility.

In early 1998, all nine points of the case were thrown out of court in Los Angeles. Truman, in an e-mail to the CBLDF, called it “a victory not only for us, but for any cartoonist who comments upon, or pays tribute to, the legacy of any public figure.”

Other cases where CBLDF has assisted artists who have encountered censorship in the form of a civil lawsuit are: Starbucks v. Dwyer and Kraft Foods v. Helm.

In 1992, prior to the CBLDF’s engagement in the Winter case, Hart D. Fisher, publisher of the horror comics label Boneyard Press, was forced to defend himself against a civil suit brought by the family of victims of Jeffrey Dahmer for publishing an unauthorized biography of the killer.  At the time, CBLDF was a young organization whose resources were completely occupied by other casework and retailer assistance, so were unable to provide monetary aid to Fisher.  Despite the Fund’s inability to assist the case, Fisher went on to successfully defend against the civil suit, ultimately prevailing  in court.