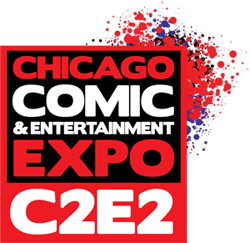 This week finds your intrepid CBLDF team headed home after a fantastic three days at C2E2 in Chicago, Illinois! We spent most of the weekend chatting with convention attendees at the CBLDF booth, talking up Free Speech and the Fund with an astoundingly attentive audience of supporters, new and old. If the weakened state of our voices is anything to go by, we probably talked to all 34,000 C2E2 attendees over the course of the weekend!

On Saturday night, our supporters got their live art, live music, and live drinking on during the CBLDF Liberty Jam at Reggie’s Music Joint. The benches were stacked with an unmatched lineup of comics artists, heads down over sketches that will become part of CBLDF’s Liberty Trading Cards from Cryptozoic Entertainment. There aren’t many places where you can see folks like Andy MacDonald (The Terminator: 2029), Khary Randolph (Spider-Man), Steve Seeley (Hack/Slash), Jenny Frisson (Hack/Slash), Tony Akins (Jack of Fables), John McCrea (The Boys), and more, elbow to elbow, making art for the First Amendment.

Nerdcore rapper Adam WarRock kept the packed house buzzing. For those of you who weren’t lucky enough to be there, WarRock is a lyrical superhero, leaping tall stages in a single rhyme. Hipster Please praised WarRock’s first album, saying he has “an uncanny ability to shape worlds with his might,” and he set the perfect tone for an incredible event.

The night was capped off with one of the most exuberant raffle winners we’ve ever met! Our winner walked off with the ultra-rare, ultra-breathtaking skate deck by Yoshitako Amano and Milo Manara. Check out that ear-to-ear grin! 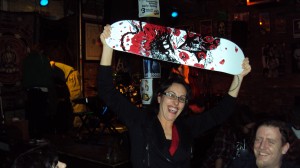 We’ll have a full gallery of photos up for you later this week!

CBLDF would like to thank party sponsors Cryptozoic Entertainment and Dark Horse Comics, along with art supply provider Pentel and the staff of Reggie’s for taking care of us. We’d also like to thank our fearless troupe of volunteers: Maggie Roll, John Metcalf, and Krista Thompson. Finally, the biggest ups go to the people who make this all possible: our members and all of the great folks who donated at the booth!

Next up: WonderCon, April 1-3, 2011, at the Moscone Center in San Francisco, California. See you there!