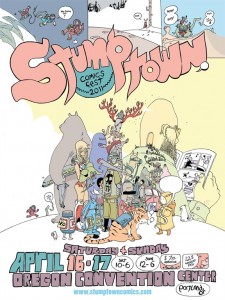 CBLDF jets back to the West Coast this weekend for Stumptown Comics Fest 2011, April 16-17 at the Oregon Convention Center in Portland, Oregon!

Like CBLDF, Stumptown is no stranger to volunteerism — it was started in 2004 by a group of dedicated volunteers who wanted to produce a comics show that focused on creators. Since, Stumptown has grown enormously in size and accolades, and this year looks to be the biggest show yet, chock full of spectacular comics guests! You’ll be able to find CBLDF at booth 308 throughout the show.

To get Stumptown off to a roaring start, the convention and sponsor Dark Horse Comics have assembled an all-star cast of creators to take part in an exclusive dinner auction, the proceeds of which benefit CBLDF! Where else could you join Matt Wagner (Grendel, Mage, Green Hornet, Sandman Mystery Theater), Eric Powell (The Goon), Brandon Graham (King City), Steve Lieber (Underground, Whiteout), Carla Speed McNeil (Finder), and more for a bite to eat?! The auction is on now, and you have until 10:00 a.m. PDT on Thursday to bid on one of ten seats at dinner, which takes place Friday, April 15, at BridgePort BrewPub in Portland’s historic Pearl District. Winners also get sketches from each of the creators and a free weekend pass to Stumptown. Bid now!

On Saturday, April 16, you can get to know CBLDF President and Beanworld creator Larry Marder during The Leguminous Life of Larry Marder panel in Room A105 from 12:00 – 12:45 p.m. The lowdown from Stumptown’s schedule:

Beans have been part of Marder’s life since the day he was born. This rich visual presentation covers the entire history of his peculiar fantasy dimension, including discussion about Marder’s many influences. This is your opportunity to discover why Beanworld has captivated readers from grade school to grad school since its first publication as a series of comic books in the 1980s. Now Beanworld is at Dark Horse Comics entertaining an entire new generation of fans. Get a glimpse into Marder’s next original Beanworld graphic novel “Something More!” And what exactly is “Beanworld 3.5” anyway?

We’ll see you at Stumptown Comics Fest in Portand, Oregon, this weekend, April 16-17. Look for us at booth #308! Don’t forget to bid generously on the chance to dine with Stumptown’s finest guests — the auction ends soon!