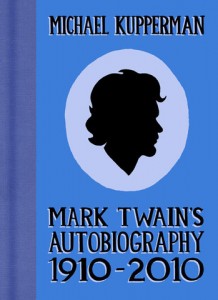 Created by humorist and cartoonist Michael Kupperman (TALES DESIGNED TO THRIZZLE), this mix of illustrated writing and comics follows Twain as he navigates the Twentieth Century and makes his way into the Twenty-First. His adventures are tense, scary, sexy, mischievous, and sometimes embarrassing. Twain spills the dirt on his secret love affairs with Marilyn Monroe and Mame Eisenhower, tells about his spying and private detective work, and dishes about his involvement in film, TV and advertising. The time he took LSD, the day he tried to hypnotize a donut clerk. Where he first met Einstein and how they travelled through time together. How to build your own raft and the life of a hobo. And who really killed JFK…? All this and much, much more!

This hardcover is signed by the author! Available now!