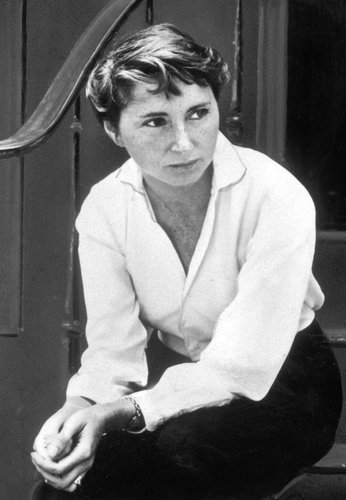 French writer Tereska Torrès, 92, died at her home in Paris last Thursday. Author of many novels and memoirs, she is best known for her book Women’s Barracks, which was challenged by the House Select Committee on Current Pornographic Materials and banned in Canada.

Women’s Barracks is a fictionalized account of Torrès’s service in the women’s division of the Free French forces in London during World War II and was published in the United States in 1950. The book portrayed the breakdown of conventional mores of young people in uniform at a time when they couldn’t be sure they’d live to see then next day.

“Ursula felt herself very small, tiny against Claude, and at last she felt warm… She placed her cheek on Claude’s breast. Her heart beat violently, but she didn’t feel afraid. She didn’t understand what was happening to her. Claude was not a man; then what was she doing to her? What strange movements! What could they mean? Claude unbuttoned the jacket of her pyjamas and enclosed one of Ursula’s little breasts in her hand.”

Tame by today’s standards, passages like these were considered shocking. The House Select Committee on Current Pornographic Materials condemned the book in 1952. They didn’t ban the book because they felt that the reproach in the narrator’s voice helped redeem it in part. Ms. Torrès added the reproachful narrator at the request of her publisher, who wanted to avoid obscenity charges.

Women’s Barracks is considered a landmark in lesbian fiction, paving the way for other writers — including the creators of comics — to follow. Read here and here for more on the life and work of Tereska Torrès.

CBLDF is an official sponsor of Banned Books Week, which takes place September 30 – October 6, 2012. Please help support CBLDF’s defense of your right to read by making a donation or becoming a member of the CBLDF!