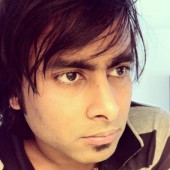 In 2007, Arifur Rahman published a cartoon featuring a character called Mohammad Cat. The cartoon was published during the Islamic holy day of Ramadan, and its publication led to protests across Bangladesh. Rahman was arrested and sentenced to 6 months in prison for “harming religious sentiments.”

Olivia Stransky with Sampsonia Way recently interviewed Rahman about his experience. Rahman explains that as far as he knows, he is the only Bangladeshi cartoonist to be punished with jail time. He describes the fallout from his cartoon:

As a result of this cartoon there were demonstrations all over the country because people felt that I had insulted the Prophet Mohammad and Islam. After that all the newspaper editors and publishers in Bangladesh decided that they would not publish my cartoons anymore.

Rahman explains that he was tortured while in prison and that he received death threats for several years. Rahman further describes that it is dangerous to draw cartoons or write about religion in Bangladesh:

Yes. Most Bangladeshi people are Muslim, and some of them don’t like cartoons about their religion. They think the religion will be insulted. Recently one blogger was killed by Islamic terrorists, and four bloggers were arrested in Bangladesh because a group of Muslims thought they were atheists and felt that they had insulted Muhammad and Islam in their blogs. Their blogs were then censored by government.

You can read the entirety of Stransky’s interview with Rahman here. Rahman’s experience is a reminder that the First Amendment affords a lot of protection that many cartoonists and artists around the world don’t have. However, even in the United States, the right to free expression and the freedom to read still needs to be ardently defended.

← CBLDF Heads to Big Wow Comicfest This Weekend!
A Tax on Violence? Not So Fast →