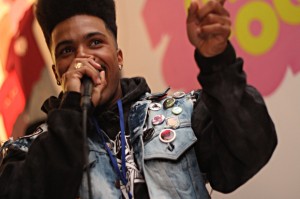 Performer Auggie the 9th at the #threadlesscbldf party.
Photo courtesy of Geoff Henao

Last weekend’s Chicago Comic and Entertainment Expo was a huge success for CBLDF! CBLDF Deputy Director Alex Cox led the charge for the Fund, and folks lined the aisles to pick up a copy of the extremely limited CBLDF Liberty Variant of Revival #9. Seeley joined us for a signing on Saturday, and Cox presented our ever-popular panel on the history of comics censorship. In addition to Revival #9, CBLDF also had signed copies of Jeffrey Brown’s new release, Vader’s Little Princess, on hand. All told, members, supporters, and fans helped CBLDF raise more than $16,000!

On Saturday night, the place to be was the Threadless + CBLDF Party at Threadless HQ! We would also like to thank our friends at Threadless for partnering with us and opening its atrium to hundreds of comics fans and CBLDF supporters and members. Highlights of the night included music by ShowYouSuck and Auggie the 9th, and a live art battle and a raffle, complete with signed CBLDF prints and Threadless gift codes! If you want to relive the night or want to live it vicariously, browse #threadlesscbldf on Twitter to see all of the evening’s highlights. 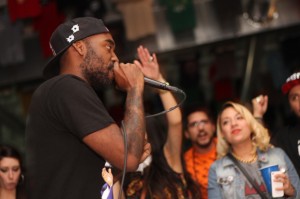 ShowYouSuck performs for a crowd of C2E2 attendees and fans at the #threadlesscbldf party.
Photo courtesy of Geoff Henao

Some of the signed premiums available at C2E2 can be found in our online store. All proceeds raised during C2E2 and the Threadless + CBLDF Party support our important First Amendment work and defense of the right to read. A big thanks to creator supporter Tim Seeley for signing, and thanks to volunteers Maggie Moninski, Felix Estrada, Jenny Romo, Dominick Cabal, and Rachel Reyna for helping us during the show!