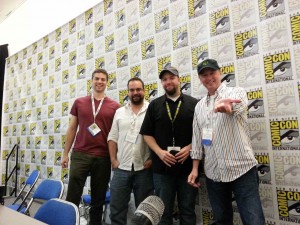 “Draw your favorite character from a banned book” were the marching orders for artists at this year’s CBLDF Banned Comics Jam. A Comic-Con tradition, at each year’s Banned Comics Jam creators reveal their creative processes and share their stories about censorship. It’s an opportunity to get an intimate look at how these artists make the work we love so much. This year, CBLDF was delighted to have Jeffrey Brown (Darth Vader and Son), Chris Burnham (Batman Incorporated), Terry Moore (Strangers in Paradise), and Tim Seeley (Hack/Slash) on board. We were also joined by two surprise guests: Jeff Smith (Bone) and Eric Powell (The Goon)!

CBLDF Executive Director Charles Brownstein kicked off the event with a quick introduction about this year’s theme: paying homage to the cartoonists, authors, and characters who’ve created the great banned books of our time. Jeffrey Brown, best known for his autobiographical comics and Darth Vader and Son and Vader’s Little Princess, kicked off the art jam with a sketch of himself chained to a table. Brown’s work has not been challenged, but he shared a story about how his book Clumsy carried mandatory Parental Advisory stickers in Michigan. 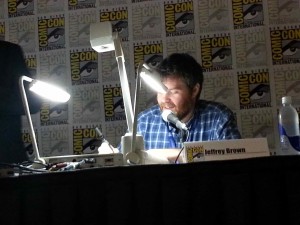 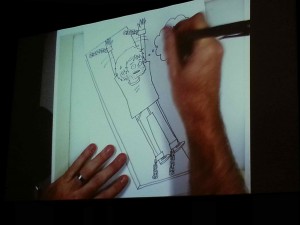 After Brown, Chris Burnham took the stage as Brownstein joked about how he’s surprised that Burnham’s work hasn’t been challenged yet, given that he’s the artist behind Officer Downe, a hyper-violent and hilarious take on the supercop motif. Burnham drew a boiled angel, a reference to Florida v. Mike Diana. Brownstein shared the details of the Diana case as Burnham inked: Diana was charged and convicted of obscenity after an undercover Florida detective posed as an artist to obtain copies of his zine Boiled Angel. 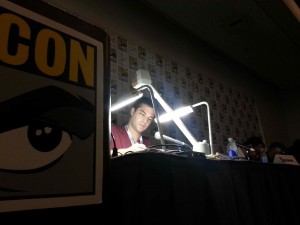 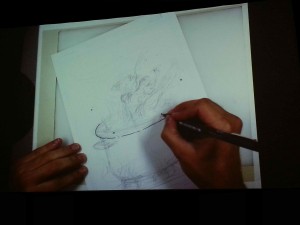 Following Burnham, Tim Seeley took the theme of the art jam to heart and drew a haunting image inspired by one of the most challenged books: Catcher in the Rye by J.D. Salinger. For decades, Catcher topped most-censored lists, frequently challenged for profanity, sexual content, and age inappropriateness. 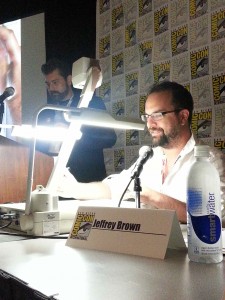 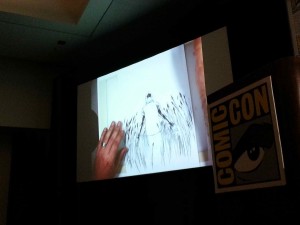 Tim Seeley’s Catcher in the Rye

After Seeley, surprise guest Eric Powell shared a piece inspired by the work of Maurice Sendak, whose books have consistently faced challenges because Sendak embraced the ideas that children should not be coddled and that what makes adults uncomfortable does not always make children uncomfortable. Sendak’s story In the Night Kitchen was frequently challenged because its young protagonist, Mickey, was depicted in the nude. Many librarians censored the book by painting diapers over the boy’s genitals, and in some cases the book was even burned. Powell depicted Max and a Wild Thing from perennial favorite Where the Wild Things Are. 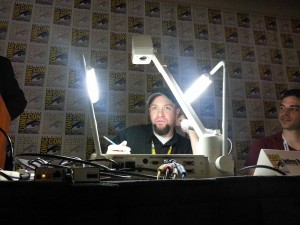 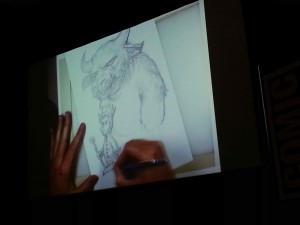 Terry Moore followed Powell to the stage, a visual and verbal rant in hand. Before revealing his real drawing, Moore first showed a sketch of a character being hung, stabbed, and otherwise violently tortured. Moore spoke to how this violent work isn’t typically what gets books banned. Upon revealing his real drawing — Most of Me Is Banned — Moore launched into an attack on the most frequent reason books are banned: sexuality, in particular the sexuality of female characters. His powerful statement was at once an indictment on both censorship and the role of women in comics. Moore further shared a personal tale about a retailer who had shelved an issue of Strangers in Paradise behind the counter with the adult-only comic books because the retailer mistakenly thought the content was sexually explicit. 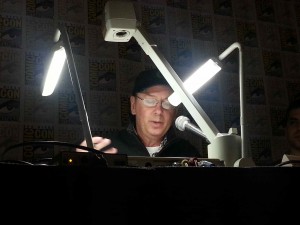 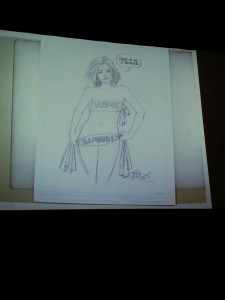 Most of Me Is Banned, by Terry Moore

Second surprise guest Jeff Smith followed with a discussion of the reasons his book, Bone, is frequently challenged in libraries. In particular, he discussed a ban in Minnesota that arose from the depiction of smoking and drinking in the book. Smith mocked the reasons for the ban, pointing out that neither activity was presented as a positive behavior and that his main heroic characters — Bone and Thorn — did not partake in either activity. In his drawing, Smith depicted Smiley Bone as Groucho Marx, cigar in hand, arguing that the parent in Minnesota who tried to ban Bone would probably try to do the same with the classic works of Marx. Smith also touched on the issue of parental responsibility in relaying that he often has to explain to parents that his current series RASL is not appropriate for younger readers. 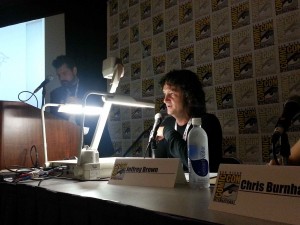 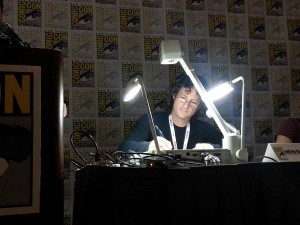 In all, 10 amazing pieces of art were created during the panel. Brownstein led an auction of the pieces, raising $2,200 for CBLDF’s coffers. The money will be used to support our important First Amendment work! 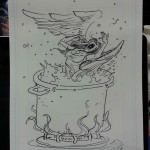 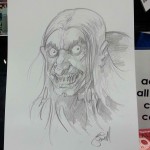 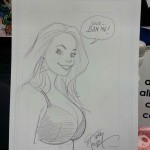 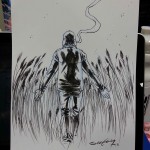 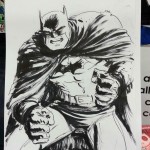 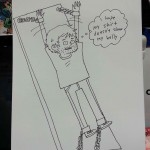 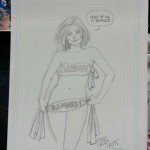 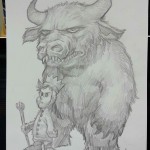 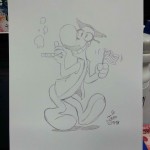 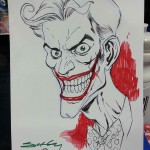