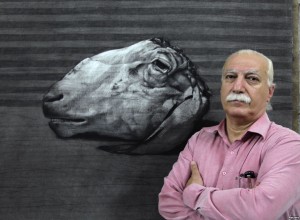 A cartoonist who co-signed a 2011 document calling for the removal of Syrian President Bashir al-Assad and his government was arrested in late July, one more in an ongoing string of arrests, harassment, and disappearances of dissenting Syrian cartoonists. Cartoonists Rights Network International reports:

[A]nother Syrian cartoonist, Youssef Abdelke, was arrested on Thursday, 18 July 2013 along with two other friends at a security barrier outside the coastal city of Tartius, Syria. He is one of the most revered and respected of all the senior cartoonists in Syria.

In addition to his cartooning work, Abdelke is a well respected engraver, draftsman, and art historian in his home country. However, his decision to add his voice to growing Syrian dissent has left him cut off from all outside contact and legal aid, though no actual charges have been filed.

Less than a year ago, CBLDF reported that Abdelke’s fellow cartoonist, Ali Ferzat, was assaulted and had his hands broken to prevent further political cartooning. And in June, Akram Raslan, who routinely portrayed al-Assad as an enemy and threat to the Syrian people, went missing and is presumed to have been arrested and in the custody of the government.

As one of the most well-respected Syrian artists, Abdelke’s arrest is just the latest example of an increasingly oppressive and paranoid regime, scrambling to suppress opposing views. A petition, originating from the artist’s wife, has received widespread support online, but it remains to be seen if this will have any impact on his detention.

← Join CBLDF in the Windy City for Wizard World Chicago!
Author Responds to Attempts to Ban The Perks of Being a Wallflower →