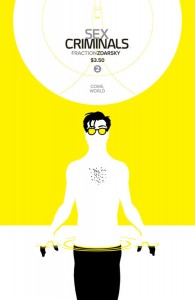 After extended review, Apple has decided to ban Image Comics’ Sex Criminals #2 from ComiXology’s iOS app based on undisclosed violations of their content guidelines. Image Publisher Eric Stephenson and creators Matt Fraction and Chip Zdarsky spoke exclusively with CBLDF about the ban.

We found that one or more of your In-App Purchases contains content that many audiences would find objectionable, which is not in compliance with the App Store Review Guidelines.

As a privately owned company, Apple is well within their rights to determine the content welcome in their marketplace. They are able to enforce their policies in a way consistent with their company objectives and goals — but at what point does their policy cross the line from protecting the company’s material interest to cultivating blatant censorship?

Without any further details on what content is unacceptable, creators are left to wonder why their books are being blocked from the app when other media with similar — if not more extreme — content is available. With inconsistent policy enforcement, vague guidelines, and lack of a transparent review process, it seems that Apple is creating a presence similar to the Comics Code Authority that risks casting a chill over creative freedom in the comics industry.

Apple’s mission statement from 2013 is:

Apple designs Macs, the best personal computers in the world, along with OS X, iLife, iWork and professional software. Apple leads the digital music revolution with its iPods and iTunes online store. Apple has reinvented the mobile phone with its revolutionary iPhone and App Store, and is defining the future of mobile media and computing devices with iPad.

Is the future of the mobile media that Apple is hoping to define one inconsistent with their reputation for innovation and creativity? Is Apple verging on becoming a centralized moral authority dictating what every user sees, reads and experiences on their personal devices?

Image Comics Publisher Eric Stephenson, writer Matt Fraction, and artist Chip Zdarsky spoke with CBLDF on their reactions to this decision, the future impact Apple could have on creators in the industry and how it feels to have their title on an elite list of banned books.

How did you find out about the ban? What particular content did they say violated their terms? Is it just the second issue, or the entire series?

Stephenson: So far, it’s just for the second issue. We were informed by Comixology about two weeks ago that Apple had notified them of a possible issue with the content in Sex Criminals #2. We were initially told it wasn’t definitely being rejected, but that it had been bumped for review and a final decision would be forthcoming. That decision came last night, and without a lot of explanation, we were told the issue was indeed found unsuitable for distribution through the Comixology app, or the Image Comics app.

Matt and Chip: Sex Criminals really is a romantic book about a relationship between two people who have similar quirks. After only two issues, do you think it’s fair to ban the story when it’s not even fully revealed yet?

Zdarksky: It’s all pretty ludicrous. The idea of shutting down an entire issue of a blossoming run over…something (still not sure of the specifics) is ham-fisted. Heck, if they were specific about the problem, we’d at least have a chance to put a black bar over something if inclined. But THEN it looks like censorship, whereas a full banning somehow evades those kinds of optics. My mind reels.

Fraction: It’s up to Apple, or any of our retail partners, to decide what they will or will not sell. That said, they sell it on iBooks. Just not on the Comixology app on iOS devices. You can even buy it on another device and put it on an iPhone or iPad. Add to that there are far more explicit, sexual, or violent kinds of media available for sale on iOS devices, via Comixology or the iTunes store or iBooks and what’s unfair here is the lack of consistency, logic, and standard.

Eric, what is Image’s point of view on the Sex Criminals ban, and more globally on Apple’s decisions to restrict material? Do you feel Sex Criminals is a book that requires limited availability based on its content?

Stephenson: Well, obviously Apple is a business and they can make whatever decisions they deem best for their interests, but no, I don’t think it’s there’s a level of inconsistency here that is somewhat difficult to understand. I mean, first off — there’s not a lot of difference between the content in issue one and issue two, but the one thing Comixology mentioned was that it may be — and they were just guessing here — because of the floating semen in issue two. But then, if that’s the tipping point…isn’t Something About Mary available on the iTunes store? Because I’m pretty sure that has a fairly memorable scene involving Cameron Diaz running a handful of “semen” through her hair thinking it’s hair gel. And there’s an episode of Girls where a guy ejaculates on Lena Dunham’s chest and you can get that on there as well, so…it’s tame content by comparison, and on top of that, the notorious Saga #12 — that’s still available on both the iBookstore and through the ComiXology app. There’s no real standard, and it’s just kind of inconsistent and hypocritical.

Matt, you’re working with Howard Chaykin, who also has a title banned by Apple and has faced distribution issues based on the content of his books. How does it feel to be part of the banned books club? Did you think this was a possibility when you began Sex Criminals?

Fraction: It’s an honor and a privilege to see our book on that list. My favorite books — Breakfast of Champions and Gravity’s Rainbow and Lolita and The Adventures of Huckleberry Finn have all been banned, to say nothing of some of my favorite comics.

I suppose I always suspected it was a possibility — and I’d rather have an informed retail partner than someone blindly ignoring what content they make available where and when and to whom — but had hoped logic, reason, and most of all, taste would prevail. Ha ha.

What do you think the message a ban like this sends? Do you think it will influence any creators to change their content? And what repercussions do you see Apple facing for rejecting wildly popular titles?

Stephenson: It would be a real shame if any creator at Image or anywhere else chose to tailor his or her content to meet criteria that is only barely defined. That would be like trying to hit a moving target, and plus…I don’t think comics or any other medium needs a company like Apple dictating what we can or can’t read, watch or listen to.

That said, if one of the long-term repercussions to Apple’s shortsightedness toward mature content is that more people visit their local comic book store, I can’t say that’s necessarily a bad thing. The direct market has long been a home for boundary-pushing creativity of all kinds, and I think instances like this only serve to remind us all of that.

Zdarsky: Oh, for sure it will influence creators. Some consciously, but most subconsciously. Art will be self-censored, scenes will be re-written. How could they not? Creators naturally want their product to reach as many people as possible! I’ll try, personally, to not let it influence me, but knowing an errant doodle of fluid which helps create life could lose me thousands of dollars will definitely be on my mind.

Fraction: Buy Sex Criminals at imagecomics.com or on Comixology for Android or iBooks for iOS, or as a physical book monthly at your local comic book store.

Suppression always aims to inspire fear and intimidation. I hope no one changes a word or a single pixel because of this. It’s the only way to fight back. Don’t change a thing.

And I think Apple is going to look very, very, silly. I am a dyed-in-the-wool consumer of Apple products, too, and in general a big fan; I think this just makes them look monolithic, slow, dim, and — most antithetical to the Apple I know and love — backwards-looking and backwards-thinking.

While Apple is with their rights as a private company to ban Sex Criminals #2, every instance of censorship is another strike against the freedom to read. We need your help to stay on the frontlines of fighting censorship. Please support CBLDF’s important First Amendment work and reporting on issues such as this by making a donation or becoming a member of the CBLDF!