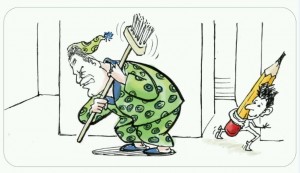 A few months ago, we told you about the ongoing battle over freedom of the press in Ecuador. The government of President Rafael Correa was using new media regulations to intimidate political cartoonist Xavier Bonilla, who was told that he could be brought to trial for a cartoon critical of Correa. Recently Bonilla has been getting more attention internationally, as he spoke at an event sponsored by the U.S.-based Center for International Media Assistance and was later featured by Index on Censorship.

First, the relatively good news: Bonilla did not ultimately face trial over a cartoon. But El Universo, the newspaper he works for, was fined 2% of its average monthly sales and directed by the government to print a “correction.” The punishment was carried out by the ominously-named Supercom, the new government media regulator formed under legislation passed last year. According to Index on Censorship, the law that purported to “prohibit censorship, redistribute broadcast fairly and protect the rights of journalists” has actually led to the exact opposite: media organizations and journalists self-censoring out of fear that they could be fined or investigated for printing something that displeased the government. In fact, El Universo has previous experience with official retaliation: in January 2013, before the new law was passed, the newspaper was fined $4 million for alleged libel against Correa.

When Bonilla spoke at CIMA’s Washington, D.C. headquarters last week, he stressed that “humor is a mechanism to overcome censorship.” Indeed, from protest signs in Tahrir Square to memes on Sina Weibo, humor often plays a serious role in resisting and circumventing censorship and other government oppressions. Political cartoons are of course the original humorous political statement, and they too often come under fire from authoritarian governments that grasp their influence. Although Bonilla escaped prosecution for the time being, he continues to risk his freedom and his livelihood every time he illustrates his opinion and shares it with the Ecuadorian public.

If you’d like to watch the full CIMA presentation (mostly in Spanish), it’s available on their website over here.