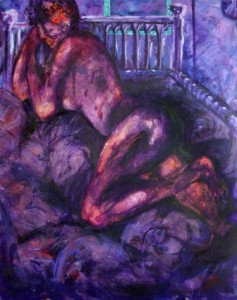 A nude displayed at an underground gallery in Iran
(Source: France24)

Like many artists in the Middle East, Iranian artists struggle with self-censorship out of fear that government authorities will retaliate and punish them. Their public art is already subject to censorship: All artists must apply for a permit before they can publicly display their work. Art that is deemed by the government to be political in nature or does not promote Islamic values is denied a public showing.

In this environment, an underground art scene of secret, private galleries has developed. A network of artists, gallery owners, and buyers has established both temporary and permanent galleries in private homes and property. However, even since the recent presidential election of Hassan Rouhani in August, artists have been increasingly reprimanded for their public statements. As a result, they are more hesitant to display their permit-less work for fear of reprisal. In contrast, other sectors, particularly journalists, are reporting slightly more freedom from censorship under the current government.

“…in my gallery, we have not displayed any really controversial work. We haven’t displayed political pieces and have not even shown a single naked body. Buyers, too, are increasingly fearful; we know they’re not interested in owning political pieces, so we don’t even try to exhibit them anymore.”

The culture of repression and fear reaches deep into the Iranian art scene with ongoing, negative ramifications. How the art community will continue to be treated under Rouhani’s presidency remains to be seen.

Amanda Jacobs Foust is a librarian who co-hosts the In the Library with a Comic Book podcast.