Every year, we like to take a look at the shelves here at CBLDF Central and see what awesome premiums would make good gifts for our gracious donors. Throughout the year, we are lucky to work with a bounty of talented artists and writers — Neil Gaiman, George R. R. Martin, Jeff Smith, Jules Feiffer, Frank Quitely, and Paul Pope are just a few of our artist supporters — and we create some cool branded goods throughout the year. So, by the time December rolls around, we have a rather awesome selection of signed graphic novels, prints, and other assorted goods with which to thank our donors and supporters.

From this pile we have culled a few items that would make REALLY EXCELLENT gifts this holiday, and for your ease, we have sorted them by whom might appreciate them most!

The best part about giving gifts from our online donation center is that you can remind people that their presents come as part of the crusade for free speech! They have an extra sparkle because these gifts protect the right to read!

And now we present, the 2014 CBLDF Holiday Gift Guide!

Jules Feiffer is one of the greatest living cartoonists, and we had the honor of hosting him at the Small Press Expo this year. While there, he took the time to sign copies of his children’s book, Rupert Can Dance. Mr. Feiffer is an American original, and this is a very special item.

Younger fans are probably aware of Sara Varon’s work; she’s been making great kid’s books for several years now. We have signed copies of one of her “silent” graphic novels, Bake Sale, which is perfect for beginner readers.

For the Bone fan in your life, we have a limited number of the very cool Bone: The Great Cow Race Artist Edition. These oversized hardcovers are reprinted from the original art pages, and are absolutely beautiful. These editions are sketched and signed on CBLDF bookplates and are a very rare item. If you are thinking something smaller, artist Jeff Smith has once again offered to PERSONALIZE editions of the Complete Bone, but time is limited!

One of the best new books for younger readers (in this author’s opinion) is the dynamic and gorgeous Battling Boy from Artist Paul Pope. We not only have signed copies of the book, but a special gift set that comes with an exclusive embroidered patch featuring Haggard West, the greatest hero of Battling Boy’s world! These won’t last long!

• Squish: Game On, signed by Jennifer and Matthew Holm: http://cbldf.myshopify.com/collections/signed-books/products/bk-squish-5

Brandon Graham is one of the most unique voices on the current comics scene, and we have a nice set of items featuring signed books, and sketchbook samplers for folks who are into genre-bending work influenced by sources as varied as street art, classic manga, and trippy ’70s sci-fi. For someone who needs to see some of the more interesting work in comics, this is a great set. 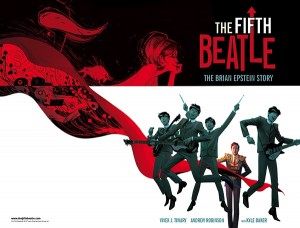 One of the more lauded books this year is the unlikely story of Brian Epstein, a graphic novel labor of love by author Vivek Tiwary and artist Andrew Robinson. The Fifth Beatle won a wheelbarrow full of awards this year, and for the music fan in your life, we have copies signed by the author.

If you want to show someone why the world has loved Superman for 75 years, go no further than Grant Morrison and Frank Quitely’s All-Star Superman, which sums up all the charms and sci-fi wonder of the Man of Tomorrow in one nice volume. It is signed by the artist, modern master Frank Quitely.

We have another very cool PERSONALIZED set in Hip Hop Family Tree, a detailed look at the story of hip hop from its earliest roots. For the music fans in your life, this two volume set can be personalized by creator Ed Piskor!

We mentioned Jules Feiffer above, but we need to reiterate that the man is an American treasure. His new graphic novel Kill My Mother is a beautiful piece of work, and this is a rare opportunity to get a signed copy.

And finally for this section, the only graphic novel to date to win a Pulitzer prize, Maus is an uncontested masterpiece that every home should have. These are signed by art speigelman on a bookplate he designed specifically for this volume.

FOR THE HARDCORE COMICS FAN

The aforementioned Frank Quitely returns with a set featuring some CBLDF-exclusive items and an anthology featuring a treasure trove of previously uncollected work from DC Comics. This set includes a signed print, postcard sets, and Graphic Ink, the newest collection of Quitely’s work. We also have a limited number of copies of the terrific graphic novel JLA: Earth 2, signed by Mr. Quitely AND the author, comics legend Grant Morrison. This book came at the peak of Mr. Morrison’s much-loved JLA run and features one of his first peaks into the DCU multiverse.

Hardcore comic fans will hear the name Bill Gaines and want to salute. Not only did Gaines publish some of the best comics ever made in the EC Comics line of the 1950s and the seminal MAD Magazine until he passed, but Mr. Gaines was the only comics publisher to stand before the US Senate during the Subcommittee Hearings on Juvenile Delinquency, during which he declared that comics were not the cause of juvenile crime in the U.S. and that comics should be available to be read by adults without the threat of censorship. He was a visionary and a fighter, and this set of mugs, shirts, and tote bags featuring his likeness declare to the world that “BILL GAINES WAS RIGHT.”

One of the most beautiful histories of comics comes in a heavy, oversized tome that you can get lost in for days. The Silver Age of DC Comics is as lovely an art book as there ever was, and the accompanying text is from Paul Levitz, perhaps the most qualified human ever to write on the subject.

More for the fanatic:

• Roots of the Swamp Thing, signed by Bernie Wrightson OR Len Wein: http://cbldf.myshopify.com/products/roots-of-the-swamp-thing-hc-signed

FOR THE CASUAL COMICS FAN

One of the coolest new series to launch this year was Southern Bastards by Jason Aaron and Jason Latour. CBLDF offered a very popular variant cover for the first issue of this series and an awesome print of said variant. Those items, as well as a signed AND sketched edition of Volume One are all available in this set.

Watchmen is one of the great superhero stories. Period. We have signed copies! What a great gift for a superhero fan!

The Comics Code Authority Seal is one of the most iconic images in comics history. Since the closing of the CCA, CBLDF has held the rights to this seal, and this year we launched several pieces of cool merch utilizing it. Check them out here!

Batman Year 100 is a wildly visionary take on a classic character from “comics destroyer” Paul Pope. What’s not to love?

More for the casual fan:

• DMZ: On the Ground Vol. 1, signed by Brian Wood: http://cbldf.myshopify.com/collections/books/products/dmz-on-the-ground-volume-1-signed-by-author 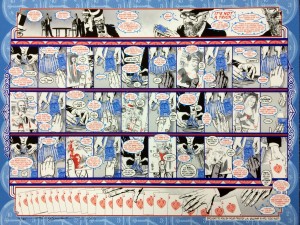 J.H. Williams is undoubtedly one of the greatest illustrators working in comics. We premiered an awesome print of “IT’S NOT A TRICK” this year at Comic Con International, and we have just a few left. Signed and numbered by Williams and his collaborator on the piece, legendary designer and letterer Todd Klein, these beautiful prints are as nice an art object as you are likely to find this holiday season.

One of the biggest graphic novel debuts this year was Shoplifter, from illustrator Michael Cho. A beautifully drawn look at life in a big city, these hardcovers are signed on numbered bookplates!

Our friends at Black Phoenix Alchemy Lab are incredibly generous, and they make sure we have awesome new fragrances in stock all the time. Recently, they sent us a limited run of imps, again inspired by CBLDF champ Neil Gaiman. The MOST BELOVED Fragrance Set features six imps and is a great, unconventional gift for the Gaiman fan in your life!

If the Gaiman fan in your life prefers seeing his gift, rather than smelling it, we have just a few of the amazing “THE DAY THE SAUCERS CAME” prints left in stock. These illustrated poems are signed AND sketched by the author, and are about to vanish forever!

Possibly the most well-known designer working today, Chip Kidd is a stalwart CBLDF supporter, CBLDF Advisory Board Member, and world-famous Batman fan. Batman: Death By Design is a full-length graphic novel featuring Kidd’s unique take on the Caped Crusader, and these volumes are signed on a bookplate designed by Mr. Kidd himself!

Everyone seems to love Buffy the Vampire SLayer, and after the show famously continued in comic book form, it eventually spun-off another series, Angel & Faith. We have copies of the first volume, signed by the mega-talented artist, Rebekah Isaacs! This is a great way for your Buffy fan friends to catch up on the Angel-verse (I don’t think that’s actually what it’s called, but you understand).

Boy, George R.R. Martin has had a crazy few years, right? Massive hit series of novels, a blockbuster television show… yet somehow he still found time to help out CBLDF and donate signed copies of the most recent Wild Cards hardcover, signed by an eye-boggling amount of contributors, including Mr. Martin himself! Very few of these left; they are a rare treat indeed!

If you think someone would appreciate an anthology featuring some of the greatest talents working today, the CBLDF Presents Liberty hardcover is hard to beat. This is absolutely one of the best samplers of top talent in comics.

For the educator in your life, we have a variety of resources, textbooks, and other tools in this collection of comics and graphic novel educational materials.

And finally, if you want to support CBLDF, but can’t find any premiums you think will work, you can always give the gift of a CBLDF Membership! Membership comes with a variety of cool branded merch, depending on the level, and puts the recipient front and center in the fight for Free Speech. And what is more important than that?

If what you see here hasn’t caught your fancy, there’s so much more in the CBLDF Rewards Zone! Visit http://cbldf.myshopify.com to browse amazing signed books, prints, apparel, and more!

← Allegedly Harmful: UK Injunction Patrols the Fine Line Between Freedom of Speech and Child Welfare
Giving Thanks for the Right to Read →