San Francisco, California, artist and SF State associate professor Victor De La Rosa took matters into his own hands by hanging four woven tapestries at a Mission District station after Bay Area Rapid Transit (BART) stalled for months to do so themselves over controversy surrounding the subject matter of one of the pieces.

The collection, entitled “La Gente De Tu Barrio/The People of Your Neighborhood,” showcases the portraits of four Mission residents along with words describing their experiences and feelings about the district. One poster celebrates the artistic side of the neighborhood with a picture of a young man holding an art supply kit surrounded by words like “Arte!,” “Murals!,” and “Tagging!” Another proudly declares that the Mission is “Multicultural, Vibrant, Colorful, Exotic, Charming, Urban, Exciting, Hip, Creative, Bohemian, Real, Edgy, Different.”

The poster in question, though, is the one of local Mickey Martinez standing amidst text like “Bitch You’re Not From Here!,” “bought off,” and “priced out,” references to an influx of new tenants in the popular neighborhood. The collection selected and produced for a competition held as part of San Francisco’s Mission Street Public Life Plan, was set to be showcased weeks ago, but due to concerns regarding how the piece featuring Martinez might violate BART’s art policy, the installation was put on hold.

According to Jim Allison, BART media relations manager, the policy prohibits the display of profanity, thus the inclusion of the word “bitch” raised red flags. That’s not the only issue, though, Allison admitted when he spoke with Golden Gate Xpress. BART was prepared to display the other three pieces, but “blurring out the word ‘bitch’ would not address the overall demeaning tone of the message in that panel,” he said. Although not explicitly commented upon by BART, De La Rosa noted that issue might also have also resided in the fact that the city elections were coming up and BART’s decision, whether intentional or not, was an act to regulate messaging to which citizens had access and to silence the viewpoint that spoke of another side of the city. 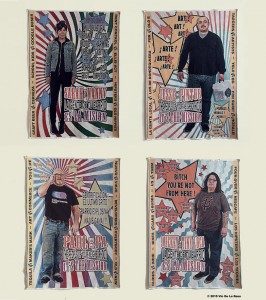 The intent of the collection as a whole was to capture the complexity of the Mission and the people who live there — to make a statement about the issues like gentrification that are important to its residents. “If BART is going to make sure that every project is 100 percent OK with them in terms of safety of the message or the ability of their riders to not be upset by the message, then that’s just going to leave hearts and flowers, because the Bay Area is not like that,” said De La Rosa. “We have a tradition of looking at tough subjects and discussing them out loud and in public.”

If I left out that one piece, that would only be 75 percent of my message. That’s not the full dialogue; that’s not the full art conversation happening in the Mission, and I didn’t want it to look like a one-sided, almost approval on my part, because that’s not what I proposed.

In response to BARTs lack of communication and ultimate decision to display only three of the four pieces, De La Rosa took matters into his own hands and hung Mickey’s portrait at the 16th and Mission street station for one hour for the public to see. “It’s ridiculous,” said resident Paul Gibbons who has known De La Rosa for 20 year. “I think its censorship. I think discussing these issues is essential. This is the type of art we need to be having in the city to facilitate this type of discussion.”

Fellow artists like Jessica Sabogal also came out to support De La Rosa’s art and message; “The censoring of Victor is a disservice to all the people that need to hear the message of so many of us that rarely get a platform to speak.”