Sometimes the most poignant cartoons are those that subtly disclose social issues by depicting the everyday life of the common man and woman. That is the approach Nigar Nazar, Pakistan’s first professional female cartoonist, takes with her immensely popular and beloved comic strip, Gogi. But like many cartoonists around the world, even Nazar’s fun-loving strip has faced challenges and censorship, especially when covering certain taboo subjects like religion.

Named one of the 100 Women of 2014 by the BBC, Nazar has made a career out of portraying the everyday escapades of the free spirited character, Gogi. A progressive woman with a quick wit and keen eye for issues impacting Pakistani women today, Gogi has a unique voice that has not only garnered a large number of fans, but has opened the door for public discussion about social issues like women’s rights, environmental concerns, and even immigration. “I’ve made 14 comic books on a range of issues like extremism and corruption, girls’ education and women’s rights,” Nazar recently told the BBC. “I think you can get away with saying a lot through cartoons that you can’t say in any other way.” 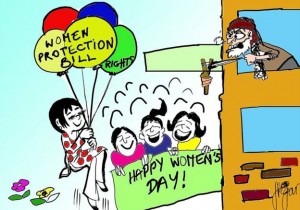 A fan of comics like Archie and other Western imports, Nazar always wanted to be a cartoonist. Although she was on track to becoming a doctor, her life’s passion led her to ditch her science classes and take up a degree in fine arts and English literature. When she moved to Karachi with her parents, it was there that Nazar would become serious about her craft. “So I approached Ali Imam, the Principal at the Institute of Arts and Crafts (which was in the Karachi Arts Council building), and told him that I wanted to draw cartoons,” recalls Nazar in an interview with the Asia Society. “[A]nd he said, young lady, we don’t have that here, but attend the classes and draw whatever you like. I had this strong desire to draw cartoons, so I just kept doing it.”

From there, Gogi became Nazar’s beloved character and a vehicle for speaking about social and political issues. 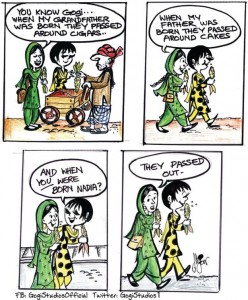 lthough Nazar has utilized Gogi and the craft of comics to comment upon issues that impact the everyday Pakistani citizen, she hasn’t been without challenges. “In a way there’s a lot of freedom of speech in Pakistan but it’s only limited to certain topics that don’t address some of the more real issues that affect people.” Nazar, herself, has struggled with self-censorship and the fine line that many cartoonists trend that could sadly lead to governmental censorship and even imprisonment. “I stay away from religion-related topics but it’s not like I haven’t addressed any taboos at all,” she says. “I think you can get away with saying a lot through cartoons that you can’t say in any other way.”

For Nazar, comics offer a unique opportunity to express oneself freely, and she’s taking full advantage of that so that she can not only provide entertainment to the public, but also fight for issues that are near and dear to her and fellow Pakistanis. “Cartoons can have a huge impact,” says Nazar, adding:

That’s what I’m planning to do. If you have a following, then your character can be very effective in giving messages. But even though my kids are always telling me that cartoons should be pure entertainment, I tell them I’d love to do that from time to time, but look, issues are always cropping up that need to be commented on.