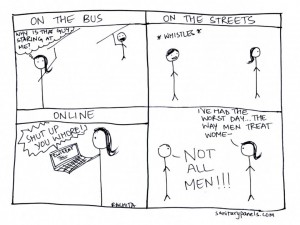 Rachita Taneja is a Bangalore-based cartoonist who has been using webcomics to address political issues in India since 2014.

Taneja’s highly accessible webcomic, Sanitary Panels, started as a political pursuit to speak out against 66A of India’s IT Act (a section that has since been struck down), which restricted the use of computers to share information that is “grossly offensive or has a menacing character.” The law has been used to threaten the free speech liberties of many in India (including cartoonist Aseem Trivedi). Taneja has gone on to broaden her spectrum of cartoons to include LGBTQ rights, women’s rights, environmental issues, mental health, xenophobia, and authoritarianism.

Taneja’s work comes at a time in which women of all backgrounds need a voice — one of the many goals of her webcomics. One of her newest webcomics is helping bring attention to a Bollywood movie directed by a woman that is considered too “lady-oriented.” Lipstick Under My Burkha and its director, Alankrita Shrivastava, were heavily criticized by movie critics, and the movie was temporarily banned from being shown in theaters in India by the country’s censor board. However, Shrivastava appealed the decision and fought against critics, explaining that her movie was never made for the male-gaze, a popular theme in Bollywood movies. The censor board allowed showings if the film was given an adult rating and some cuts were made.

Other female Indian cartoonists are speaking out as well. Kanika Mishra spoke out against guru Asaram Bapu, who was accused of sexual assault of a minor. Unfortunately, her cartoons about Bapu were followed up with death threats from his loyal followers. Mishra talked about being so scared of the backlash that she did not leave her house for months.

Although Taneja has not been harassed in the way Mishra has, she is unfortunately not immune from online trolling about her work as well. Though this has not stopped either woman from continuing her work, their presence as female voices are needed more than ever.

To see more of Rachita Taneja’s work you can check out her website.