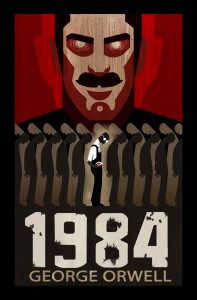 First up is George Orwell’s dystopian epic 1984, which is being challenged in Jefferson County, Idaho. The school is considering banning the book’s use in senior-level government classes after a parent complained over “violent, sexually charged language” in the novel. According to reporting by Devin Bodkin at IdahoEdNews.org, Jefferson County School District superintendent Lisa Sherick seems to be considering the complaint, questioning whether the book contradicts the “basic ideals, goals and institutions of the local community.”

Students at the school are fighting back via social media. One senior took to Facebook to decry the censorship attempt, writing that “The book 1984 is being banned because a parent thinks their almost 18 year old can’t handle it.” Bodkin reports that the teachers of the courses had informed students that the book had already been banned, but administrators deny the report, telling him that the book is still in use while they weight their options. District policy does specify that any person may submit an oral or written complaint about curricular materials, but the policy does not lay out a specific process on how those materials are reviewed.

Meanwhile, administrators in Buncombe County, North Carolina, are considering a complaint about Toni Morrison’s The Bluest Eye, which is being used in high school honors English courses.  Parent Tim Coley challenged the book over sexual content. “It’s astounding really that somebody thinks it’s OK for kids to be reading this in school,” Coley told  Tanja Rekhi with local ABC News affiliate WLOS-13. “As a Christian single dad, that’s not the values I teach my kids, and it’s certainly not OK for them to have to read a book like that.”

Parents were informed of the book’s inclusion in coursework at the beginning of the year when the instructor sent out the syllabus. Students also have the option to select other reading if a book makes them  uncomfortable. A review committee has been formed in response to the challenge. They will read the book in full before issuing a decision. The parent can appeal the decision to the school board if he is dissatisfied.

If Buncombe County sounds familiar, it’s because they’ve been covered here before: in 2015 an attempt was made to remove Khaled Hosseini’s The Kite Runner from classrooms. The book was ultimately retained, but the district also changed their policy regarding challenged materials, ensuring that they would continue to be used in classrooms until the challenge was resolved rather than removing them. CBLDF joined the Kids’ Right to Read Project in defending the book and asking for the policy change.

We’ll be following both challenges, so stay tuned for updates!

← 31 Challenged and Banned Comics for Banned Books Week
Why Do Comics Get Challenged? →