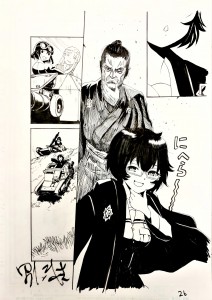 Last year, members of the international manga community found themselves on the defensive after BBC journalist Stacey Dooley broadcast the documentary “Young Sex For Sale In Japan,” which advocated that Japan ban large swaths of erotic manga. Takeshi Nogami, artist of the popular “Girls Und Panzer” manga franchise, is familiar with these lines of attack, and frequently speaks out in support of free expression in manga. He invited CBLDF Executive Director Charles Brownstein to his Tokyo studio last year to discuss the impact of the BBC documentary, the battle for free expression in Japan, and the best way to make historical comics.

The pictures throughout the article are pieces of Takeshi Nogami’s original art available to new members for a limited time. Find out how to get yours here.

Takeshi Nogami: I learned a lot from the interaction that I had with BBC’s [Stacey] Dooley. For three hours she sat right next to me, and no matter what I said, she was completely convinced that I was a scumbag. She was completely driven to try to convince me that my perspectives were invalid. I wanted to know how she came to think that I was so wrong. So, I asked her, ‘what is a human being?’

I asserted the opinion – possibly influenced by my Japanese or Buddhist kind of perspective – human beings are a mixture of both very good well-intentioned aspects, as well as elements that are marred in filthy aspects. We are a combination of both. She asserted in her counterpoint, that humans are pure righteous beings who are corrupted to fall from grace. She saw it as her role to point that out and to try to rectify people that have fallen from the righteous path. 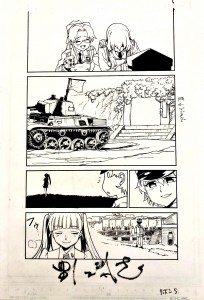 I was able to understand that our discussion reached an impasse because our conceptions of who we are, as human beings, would not be able to be resolved.

CB: I first encountered your advocacy for free expression when Japan introduced new regulations affecting the sale of adult manga, and when CBLDF was defending American citizen Ryan Matheson against child pornography charges because Canada Customs found chibi art on his computer. What are some of the lessons that you’ve learned in advocating for free expression that you would like to share with others of similar mind?

TN: There is a need for advocates of free speech. But at the same time, [while] advocacy is important, if you are a creator, trying to develop fans for your work is also very important. Reaching commercial success and encouraging a different set of perspectives in your work can be more persuasive than winning your opponents over through debate.

Personally, in Japan, I am of the mind that the otaku industry has finally come around to being able to have a mature dialogue with legislators and politicians about how [free speech] issues are very important. That manga is not an enemy but is something that can be a means for government to interact with constituents. That’s one of the most important ways of countering calls for censorship that I think has been learned recently. 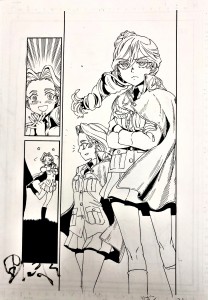 CB: It takes a great deal of courage for a creative person to align themselves politically in any place. Even in the United States, there are some creative people who are reluctant to put themselves out there for a free expression cause, even though they may privately hold such views. What is your advice to your fellow creators in terms of finding the courage to be public about free expression advocacy?

TN: You really cannot do what you’re not comfortable with. But it is important to keep in mind, and while this might sound a little banal, that if censorship and regulation proceeds to a certain degree, then your own work will not be economically viable anymore.

Having said that, advocate for free speech how you feel comfortable. There’s not just one way of being a free speech advocate. 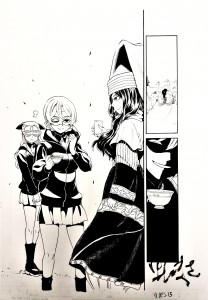 There are many people, even within Japan, who say ‘I like manga, but I hate this adult stuff’ or ‘I like this manga, but this is way too much gore for me.’ But often, people who are advocating for censorship are actually harboring personal aspirations or self-interests about other things. I think it’s important to counter censorship viewpoints with our own self-interest to be able to read a wide range of material. My right to enjoy a wide range of material is valid as a counterpoint against your desire to shut this down. 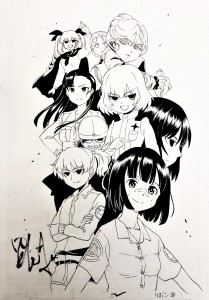 Here, the advocacy that’s conducted by the CBLDF plays a very important part. I would be overjoyed if people would feel compelled to donate to the CBLDF and other advocacy programs.

CB: Turning to your creative work, I am in your studio, and there’s historical reference everywhere. I’m wondering, are there worlds you’d like to conquer creatively that you have not?

TN: Right now I’m researching the American Civil War and I’d to take that up next, possibly with an American audience in mind. There are certain themes that are taboo in Japanese fiction, with regards to recent events in Japanese history that I’d like to pick up. For instance, Imperial Japan expanded into the Chinese mainland and basically cobbled together a nation, Manchuria. At the end of the war, many of the Japanese citizens who had immigrated there had to get the hell out very quickly. The chaos that ensued is something I’d like to take up in the future. Prior to like ten years ago, if you brought up the subject of the evacuation from Manchuria, many people, professional editors, would discourage me. Not only were the people that were left behind still alive, but the people that ditched these people were still alive. So both sides, the victims and the perpetrators of the travesty, are now passing away so it will be easier for me to pursue that subject matter.

CB: What are the qualities of manga that make it so successful for addressing history?

TN: I think the greatest attribute of historical period manga is that you can focus on the emotional aspects of the characters. It’s easy for historical manga to fall prey to just following whatever actually happened, as if it were a text book. However, manga is not a very viable medium for presenting logic, but it is an extraordinarily useful means of presenting emotional thought processes.

For example, consider Napoleon – manga is a very useful means of trying to reexamine the different emotions and thought processes that went through his mind. What are the different feelings he held over the course of his life? In manga, readers that are following Napoleon’s sentiments can become his friends.

CB: Earlier, we were talking about research as a joy and as a black hole, how do you keep yourself from falling in that black hole?

TN: Deadlines! [Laughter.] I think manga artists should actually be novices of history, to a certain degree, and not go through too much research. My staff and I have arrived at the conclusion that if you’re really familiar with a subject matter, it’s almost an impediment to render it in the realm of manga. Allowing a manga author to pursue storylines or characters that don’t follow conventional norms makes things a little more interesting.

Charles Brownstein is the Executive Director of Comic Book Legal Defense Fund. His work at CBLDF includes development of the organization’s program, fundraising, and administrative work. Beyond CBLDF he is prolific and sought out writer, lecturer, and curator whose work has reached audiences all over the world. His publications include Eisner/Miller, and he has been featured in documentaries including Robert Kirkman’s Secret History of Comics. Most recently, he co-curated “The Art of MARCH: A Civil Rights Masterpiece” with John Lind, which is on view at the Society of Illustrators in New York City until June 30.

Dan Kanemitsu has been doing translations professionally since 1988. He’s worked with both American and Japanese companies and creators as both a translator and as a creative and cultural consultant. Some of the larger projects he has worked on include Gasaraki, Love Hina, Nadesico, Space Battleship Yamato 2199, Evangelion: New Theatrical Edition series, and Your Name.. Kanemitsu has also written extensively on censorship and free speech in Japan.

← Sharing the Language of Comics – Charles Brownstein on Manga and Comics Censorship Today
Fight for Free Expression with Inuyashiki, an Unlikely Superhero →