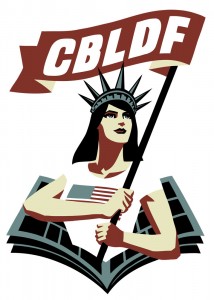 Comic Book Legal Defense Fund is a non-profit organization dedicated to protecting the First Amendment rights of the comics medium.

Our work takes us into courtrooms, classrooms, conventions and libraries all over the United States where we provide legal aid, education, and advocacy to protect the First Amendment rights of the readers, creators, retailers, publishers, and librarians of comics, manga, and graphic novels.

Here’s some information about our work, and why you should get involved!

Legal Defense: Since 1986, the CBLDF has managed and paid for the legal defense of individuals whose First Amendment rights are threatened for making, selling, or even reading comic books. We also provide free referrals for cases before they rise to the level of a court challenge. Most recently, the CBLDF successfully defended Ryan Matheson, an American citizen who was unlawfully arrested at Canada Customs and wrongly charged with importing child pornography for having innocuous manga images on his laptop computer. Ryan’s case cost $75,000, which the Fund covered.

Legal Advocacy: The CBLDF works independently and with coalitions to fight unconstitutional legislation that would affect how comics are made and distributed. We were active plaintiffs in the fight against compulsory internet filters in libraries. Most recently, we helped knock out an unconstitutional Utah bill to censor Internet speech, and were cited by the United States Supreme Court in a case against a California law that sought to broaden the definition of speech not protected by the First Amendment to include violent images.

Information Rich Website: CBLDF.org is a robust website offering a daily news blog on First Amendment issues, a large and growing resource section with case files and documents on the history of comics censorship, and tool kits for artists, readers, and librarians about their First Amendment rights.

Lectures & Panels: The CBLDF delivers dozens of presentations on the history of comics censorship and First Amendment rights issues facing the medium and its users each year. CBLDF presents at comic book and anime conventions, library and book trade conferences, universities, and symposiums in the United States and around the world. We also offer our presentations to volunteers to present in their communities.

Weekly Newsletter: CBLDF offers a weekly newsletter with updates on First Amendment and censorship issues. Sign up for our newsletter on CBLDF.org!