Case Study: In The Night Kitchen 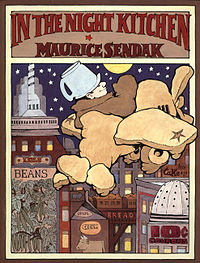 Maurice Sendak’s books have been frequently challenged in libraries, in particular his children’s book In the Night Kitchen, an award-winning book that features a young boy’s dream journey through a baker’s kitchen. The book upset many librarians and adults because its young protagonist, Mickey, was depicted in the nude. Many librarians censored the book by painting diapers over the boy’s genitals, and in some cases the book was even burned.

Letters of Note ran a letter written by Sendak’s editor, Ursula Nordstrom. Nordstrom wrote to one of the librarians who burned copies of In the Night Kitchen:

I am indeed distressed to hear that in the year 1972 you burned a copy of a book. We are truly distressed that you think it is not a book for elementary school children. I assume it is the little boy’s nudity which bothers you. But truly, it does not disturb children!

I think young children will always react with delight to such a book as In the Night Kitchen, and that they will react creatively and wholesomely. It is only adults who ever feel threatened by Sendak’s work.

Nordstrom further gathered hundreds of signatures in defense of the book when the School Library Journal shared a news item advocating for censorship of the book by diapering the boy using paint. In her letter to librarians, professors, publishers, authors, and artists, Nordstrom responded with the following (source: Letters of Note):

You can read more about the censorship of In the Night Kitchen and Nordstrom’s advocacy on behalf of the book here.

Stephen Colbert interviewed Sendak shortly before Sendak passed away, asking Sendak about writing for children and his books, including In the Night Kitchen. Colbert put his own spin on the censorship that the book has experienced. You can view the interview here and here.