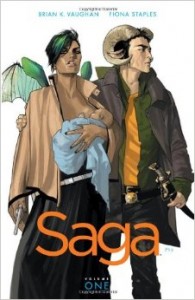 Brian K. Vaughan and Fiona Staples sci-fi epic adventure, Saga, has not only become one of the bestselling and most critically acclaimed comic series since its debut in March 2012, but it has also become one of the most controversial comics, holding the sixth spot on the ALA’s 2014 Top Ten List of Frequently Challenged Books.