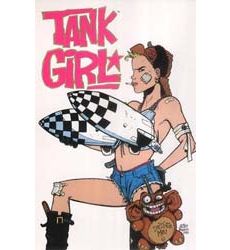 Tank Girl, the character created by writer Alan Martin and artist Jamie Hewlett, first saw print as a comic strip in 1988. The British series, originally set in post-apocalyptic Australia, follows the adventures of Tank Girl, her mutant kangaroo boyfriend Booga, and a varied cast of secondary heroes and villains. The series has also been drawn by Ashley Wood, Rufus Dayglo, Philip Bond, and Jim Mahfood, among others

The Tank Girl books embrace the tropes of punk culture, from Tank Girl’s randomly shaved and multi-colored hair to her disdain for authority. The series frequently employs psychedelic imagery, disjointed storytelling, and surrealism. The irreverent and black humor of the series and its depiction of a strong central female character have garnered the series a devoted fanbase.

The Tank Girl books are meant to entertain an adult audience, frequently depicting violence, flatulence, vomiting, sex, and drug use. For this reason, the book has been challenged in libraries. In 2009, the book was challenged at the Hammond Public Library in Hammond, Indiana. A library patron asked that the book be removed for the depiction of nudity and violence. The library chose to retain the book, and it remains  on shelves today.