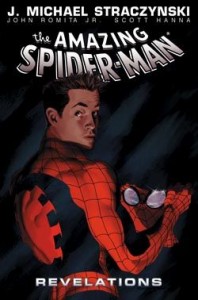 Your friendly neighborhood Spider-Man is the last character you’d expect to see swatted off of a school library’s shelves, but that was exactly what happened in 2009 when a parent in Millard, Nebraska protested the inclusion of Amazing Spider-Man: Revelations by J. Michael Straczynski, John Romita, Jr., and Scott Hanna in a middle school library.

“My son looked at this and goes, ‘Ohhhh!'” said Physha Svendsen.

She said the book that her 6-year-old son brought home is not age-appropriate for Norris Elementary School students and wants it removed from the library.

“It has a lot of sexual undertones in here, as far as sexuality goes,” she said. “They can learn this through any other place, but it’s not something I allow them to learn, in my house at least.”

Svendesen didn’t elaborate on the book’s literary elements that she found sexually inappropriate. Some illustrations in the book showed a female character wearing a bikini and a short skirt.

Donna Helvering, head librarian for the district told the news outlet that the library has a thorough selection process that the book had passed, and that it was in demand by other students. Beyond the selection process, the library also has a strong review policy. According to the school’s policy, parents can file complaints and the school is required to form a committee to evaluate the complaint and make a consensus determination to retain or ban the book within thirty days. Unfortunately this measure was not strong enough for Svendsen who told the media, “she plans to hold on to the book that her son brought home while the review process takes place.”

The media appeared to quickly lose interest in the challenge, as coverage of the resolution to the challenge either missed airwaves or was negligible. Fortunately, Norris Elementary School in the Millard School District keeps their library catalog online, and an August 2014 search of the catalog shows that they still have a copy of Amazing Spider–Man: Revelations, although it currently has a status of “out for repairs.” If someone had put it in that status in 2009 just to get it off the shelf and satisfy Svendsen, it’s unlikely the book would have been left it in the catalog this long. More likely it’s just falling apart from use!