This weekend the Comic Book Legal Defense Fund lands in the windy city with an incredible array of events and exclusives for our supporters at the inaugural edition of C2E2!  Join us for An Evening with Neil Gaiman with special items from CBLDF, BPAL & Neverwear; Signings with Tony Harris; an exclusive new print by Gaiman and Harris; and the launch of the CBLDF Exclusive Benefit BPAL fragrance Banned in Boston!

An Evening With Neil Gaiman

On Saturday, April 17, at 7PM Neil Gaiman will be giving his only reading in 2010 to benefit the Comic Book Legal Defense Fund in the Arie Crown Theater at McCormick Place! The last time Neil Gaiman performed theatrical readings was ten years ago on the “Last Angel Tour.” On that tour, he crisscrossed the country, giving sold-out readings of stories and poems, both new material and beloved tales. That was ten years ago. In those ten years, Mr. Gaiman’s published such books as American Gods, Coraline, and The Graveyard Book. He’s made movies and operas. He even started keeping a blog. A generation has grown up who have not seen an evening with Neil Gaiman — until now.

For One Night Only. Neil Gaiman. Only for the CBLDF, and only at C2E2!

Tickets for An Evening With Neil Gaiman are available at C2E2 Registration at McCormick Place on the 2nd Floor or the CBLDF booth 933, starting Friday.  Admission is $20 for C2E2 Badge Holders and $35 for the General Public not attending the convention. For more information, please visit: http://c2e2.com/en/Events/Neil-Gaiman/

To commemorate Neil Gaiman’s triumphant return to Chicago, Tony Harris, the award-winning artist of STARMAN, EX MACHINA, and WAR HEROES has illustrated an all-new print based on the unpublished poem “In Relig Oran,” which Gaiman will premiere for the first time at “An Evening With Neil Gaiman!” Unsigned copies of this gorgeous full-color 11 x 20 print will be available for a $20 donation to CBLDF at C2E2.

All New ECHO Print by Terry Moore Premieres in Chicago! 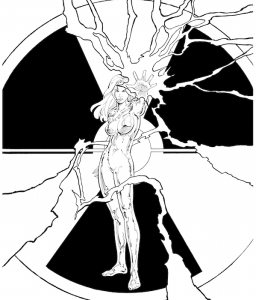 Terry Moore, the award winning creator of ECHO and Strangers in Paradise premieres a brand new print to benefit the Fund at C2E2.  A beautiful 11 x 17 presentation of the original black and white line art from the cover of the upcoming Echo #22, this print is only available for donation to the CBLDF!

The Black Phoenix Alchemy Lab, creators of unique fragrances based on literary and artistic works, are coming to Chicago in force with a variety of new fragrances to benefit the work of the Comic Book Legal Defense Fund at booth 951!  New fragrances include BANNED IN BOSTON & the NEVERWHERE family of scents.  Details include:

“Banned in Boston” was a phrase coined in the 19th century that was used to describe material, be it a motion picture, photograph, literary work, or other work of art, that contained objectionable or obscene content. Boston city officials and the Watch and Ward Society took their lead from the Comstock Law, which prohibited obscene materials from being distributed via the US Mail service, and formed their own strict censorship guidelines. Provocative or offensive material was prohibited from distribution or exhibition within Boston city limits.

The effect was much like that of the RIAA’s Parental Advisory tags: if something was Banned in Boston, it only served to pique interest and spike sales or attendance.

Obscene, lewd, lascivious, and decidedly objectionable. A filthy, post-coitus scent: sweaty and sweet, laced with laudanum, splashed with booze, and stained by tobacco.

(Please note: the Banned in Boston label is NSFW)

ANESTHESIA
A scent that slips through the cracks: peppermint, lavender, bergamot, and mandrake.

MR. VANDEMAR
Dark and gangly, with a glint of razor-sharp stainless steel behind it: opopponax, costus, black pepper, black sandalwood, and polished metal.

The Neverwhere scents are part of an ongoing not-for-profit project, and proceeds from the sales of all Neil-inspired perfumes go to benefit the Comic Book Legal Defense Fund, which works to preserve and protect the First Amendment rights of the comics community.