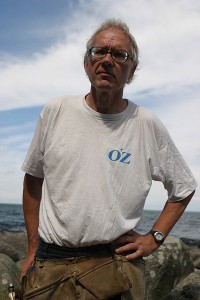 The controversy stems from a series of drawings Vilks did in 2007 depicting Muhammad as what is called a “roundabout dog,” a popular form of Swedish art installation. After the Swedish newspaper Nerikes Allehanda printed one of the drawings in this series, it gained international attention as well as international criticism, causing several middle eastern governments to condemn Vilks just a year and a half after the international controversy surrounding the printing of Muhammad cartoons in the Danish newspaper Jyllands-Posten.

“From what I understand: When he was attacked, Vilks was showing a video that dealt with homosexuality in Iran, which, like drawing pictures of Muhammad, is considered by Islamic adherents to be taboo.

“Nonetheless,” Davies continued, “no matter what a person’s position is on any given subject, as soon as they resort to violence, they are acknowledging that their verbal argument is unsupportable.

Since the attack, Vilks’ blog has been hacked, and all content replaced with a message about his drawings of Muhammad. Vilks has been resolute in his desire to continue lecturing in the face of these threats. “What you get is a mob deciding what can be discussed at the university,” Vilks told the Associated Press. “I’m ready to go up again. This must be carried through. You cannot allow it to be stopped.”