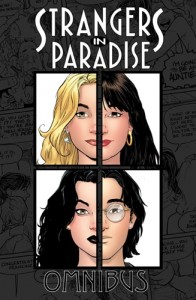 Terry Moore and Black Phoenix Alchemy Lab have teamed up to create an extraordinary donation reward for the CBLDF – The Strangers in Paradise Omnibus Lettered Edition!

Limited to just 26 copies, with fewer than 10 left in the CBLDF’s stock, the SiP Omnibus Lettered Edition includes: One set of the strictly limited, and completely sold-out, three-volume hardcover SiP Omnibus edition, an original drawing by Terry Moore, and a bottle of “Parker Lily,” a fragrance based on the beloved series, created by Black Phoenix Alchemy Lab, and also limited to just 26 bottles! This extremely limited edition is available for a $500 donation to the Comic Book Legal Defense Fund. Get Yours Now!

“We couldn’t be happier about supporting the CBLDF with this once in a lifetime offering,” SiP creator Terry Moore says. “We’re also honored to work with Black Phoenix Alchemy Lab, who did an astonishing job capturing the spirit of SiP in the Parker Lily fragrance. As a long-time supporter of the Fund and their ongoing fight for the comics community’s First Amendment rights, I’m thrilled to lend a hand!