Comic-Con is here! CBLDF is celebrating the country’s largest gathering of comics and pop culture fans with massive slate of events! Three parties, Six Live Art Events, an unforgettable auction, the best selection of signed graphic novels at the convention, and amazing exclusives await! Read on to see what the CBLDF has in store for you at Comic-Con!

From the start of Preview Night to the closing moments on Sunday, CBLDF has an amazing array of signed graphic novels, art prints, t-shirts, and other surprises for you at Comic-Con. Our inventory of signed graphic novels includes more than 200 titles and includes hot titles autographed by creators including: Geoff Johns, Neil Gaiman, Jim Lee, Jill Thompson, Stan Sakai, Frank Miller, and many, many more! Stop by the CBLDF at booth 1920, right across from DC Comics and claim one of these amazing donation rewards!

The CBLDF is proud to debut two amazing exclusives at Comic-Con. First up is an all new Black Phoenix Alchemy Lab fragrance “Liberty Leading The People,” inspired by the famous Delacroix painting embodying the ideals of liberty. We also are proud to produce a brand new, signed CONAN print by Darick Robertson, commemorating his cover to CBLDF’s Liberty Comics 2010, coming this fall from Image!

This year CBLDF brings you THREE amazing parties to celebrate Comic-Con! CBLDF parties attract the cream of the comics crop, and at each event you can expect to meet and mingle with art stars at work and play. CBLDF’s Comic-Con parties are open to everyone, whether or not you have a Comic-Con pass, so bring your friends and celebrate comics and Free Speech at any of these events: 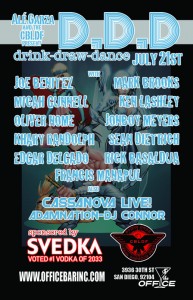 Wednesday night it’s Drink, Draw, Dance! a pre-con party, presented by Ale Garza and CBLDF at The Office! Attending artists include Joe Benitez, Mark Brooks, Francis Manapul, Micah Gunnell, Ale Garza, Sean Dietrich, Oliver Nome, and many others! Also performing live will be up and coming hip-hop artist, Cassanova, as well as a DJ set from Ale Garza! All artwork created by the attending artists will be auctioned off at the CBLDF’s Saturday night auction! The party starts at 9 PM and rolls on til 2 AM. The Office is located at 3936 30th Street in North Park. No cover! RSVP on Facebook: http://www.facebook.com/#!/event.php?eid=109611535756236 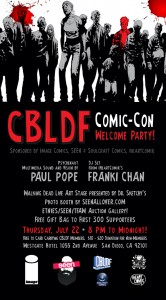 Thursday it’s the CBLDF Comic-Con Welcome Party, sponsored by Image Comics, in association with SeenAllOver.com, Soulcraft Comics and IHEARTCOMIX! Festivities include a WALKING DEAD Live Art Stage, featuring the book’s co-creator Charlie Adlard and models presented by Dr. Sketchy’s Anti-Art School! PSYCHENAUT, multimedia sound and vision by Paul Pope! DJ set by Franki Chan of IHEARTCOMIX! Plus, a photo booth provided by seenallover.com! All this, and an auction preview gallery, featuring ETNIES/SEEN custom designed sneakers, the TFAW.com art auction, and a gift bag for the first 300 contributors! Come dressed in your zombie finest and party down! Free for CBLDF Members, $10 to $20 suggested donation for non-members! The Westgate Hotel is at 1055 2nd Ave in downtown San Diego. RSVP on Facebook: http://www.facebook.com/#!/event.php?eid=134933566541001

Saturday brings SCENES OF A GRAPHIC NATURE, presented by Nerd City and sponsored by Image Comics, TFAW.com and Nerd City, featuring live art by Jim Mahfood, Mike Huddleston, Scott Morse, King Gum AKA Dave Crosland, Jason Shawn Alexander, and more, with DJ sets by Major Taylor and Red Sonya, PLUS a performance by San Diego rockers The Burning of Rome, there is no doubt that this is THE party for Nerds in the know. SCENES kicks off at the Soda Bar at 3614 El Cajon Blvd. Presale tickets are available at http://tickets.frontgatetickets.com/choose.php?c=1&lid=45223&eid=52134

AUCTION PREVIEW WILL LAUNCH ON CBLDF.ORG ON MONDAY, JULY 19

And online now is Lunch With Geoff Johns at Comic-Con! Make your Comic-Con unforgettable by bidding spend a one-on-one hour with DC Entertainment’s Chief Creative Officer Geoff Johns in an auction benefiting the Comic Book Legal Defense Fund! This is your chance to ask all your questions about Johns’ unforgettable characters, stories, and behind the scenes insights! All proceeds from this event will benefit the First Amendment legal work of the Comic Book Legal Defense Fund! Bidding ends on Wednesday, July 21! Visit http://myworld.ebay.com/cbldf/ for your chance to win!

The CBLDF Master Sessions are back, with a full slate of insightful craft programs by comics masters! This year’s sessions are:

12:00-1:00 CBLDF Master Session: Paul Pope: Inking with Speed and Precision— Paul Pope became an art icon by building unforgettable characters and worlds with his fearlessly fluid and singular line art. Each of his pages appears to be tightly composed but rapidly executed. Bring your sketchbooks and learn the secrets of a fast, but precise approach to inking at this CBLDF Master Session. The original art from the session will be auctioned off on Saturday night in the CBLDF’s Art Auction. Room 30CDE

1:00-2:00 CBLDF Master Session: Rob Liefeld: Designing Iconic Characters— Learn what it takes to design a character that’s lasting, iconic, and cool. Using his legendary creations Deadpool, Cable, and Youngblood as examples, Rob Liefeld shows you the values that go into creating a character who can leap from the comics page and into games, film, television, and merchandise. The original art from this session will be auctioned off on Saturday night at the CBLDF’s Art Auction! Room 30CDE

12:00-2:00 CBLDF Master Session: Jill Thompson: Secrets of Watercolor Technique— Bring your sketchbooks and learn the secrets of expressive watercolor from one of the medium’s top practitioners! Renowned for her work on Beasts of Burden, Scary Godmother, and Sandman, Jill Thompson shows you the intricacies of the watercolor medium and how to apply it to making masterful comics and covers. The original art from this session will be auctioned off on Saturday night at the CBLDF’s Art Auction! Room 30CDE

12:00-1:00 CBLDF Master Session: Terry Moore: Drawing Characters with Character— Learn what it takes to draw characters whose distinctive actions define them on the page. In Echo and Strangers in Paradise Terry Moore has established himself as a master for expressing a wide range of emotions through his characters. Bring your sketchbook and follow along as Moore shows you the secrets of how to make your characters “act” on the page in this CBLDF Master Session. The original art from this session will be auctioned off on Saturday night in the CBLDF’s Art Auction! Room 30CDE

1:00-2:00 CBLDF Master Session: Darick Robertson: Body Language in Sequential Storytelling— Bring your sketchbook and learn how to express action, attitude, and meaning through your characters’ body language in this CBLDF Master Session. In his work on The Boys, Transmetropolitan, and Conan, Darick Robertson has had to express story through his drawings of a wide variety of characters. Follow along as he demonstrates how body language can add dimension to your sequential storytelling. The original art from this session will be auctioned off on Saturday night in the CBLDF’s Art Auction. Room 30CDE

12:30-2:00 CBLDF Live Art Jam— Watch Tim Seeley (Hack/Slash), Ale Garza (Fathom), Chris Burnham (X-Men: Manifest Destiny), and Daniel Leister (Hack/Slash) battle it out to see who can make the coolest art before your eyes! Get an inside look behind the scenes at how these artists work, as they make live art projected onto the big screen at the CBLDF Live Art Jam! All art will be auctioned off at the end of the event to benefit the First Amendment legal work of the Comic Book Legal Defense Fund. Room 5AB

Whatever your comics passion, there’s something great in store for you from the CBLDF at Comic-Con! See you there!

The Comic Book Legal Defense Fund was founded in 1986 as a 501 (c) 3 non-profit organization dedicated to the preservation of First Amendment rights for members of the comics community. They have defended dozens of Free Expression cases in courts across the United States, and led important education initiatives promoting comics literacy and free expression. For additional information, donations, and other inquiries call 800-99-CBLDF or visit them online at www.cbldf.org.