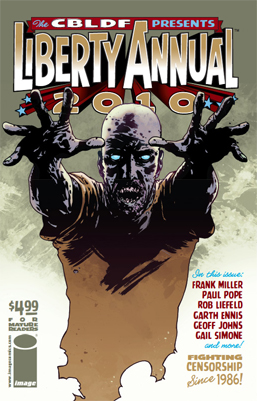 The Comic Book Legal Defense Fund is proud to offer a special NYCC variant cover of the Liberty Annual 2010! Boasting work by some of the best creators in the industry, all proceeds from the Liberty Annual benefit the Comic Book Legal Defense Fund! This cover, limited to just 1,500 copies, features full color art by the WALKING DEAD’s Charlie Adlard, and will be available from the CBLDF at the con, but until Sunday you can preorder it here!

The best in the industry contributed to CBLDF’s LIBERTY ANNUAL 2010, which includes a new The Boys story by GARTH ENNIS & ROB STEEN, the first new Megaton Man adventure by DON SIMPSON in over a decade, an all-new Milk & Cheese story by EVAN DORKIN, a new Conan tale by DARICK ROBERTSON, Boilerplate by ANINA BENNETT & PAUL GUINAN, and “The First Amendment: It’s Why We Fight!” by LIBERTY COMICS editor LARRY MARDER.

For a limited time only, you can also preorder the NYCC Exclusive WALKING DEAD variant cover. Limited to 1,500 pieces to benefit the CBLDF, this cover is available until Sunday October 3 from: http://www.newyorkcomiccon.com/en/NYCC/Show-Store/Liberty-Comics/

The CBLDF is a non-profit organization dedicated to the protection of the First Amendment rights of the comics art form and its community of retailers, creators, publishers, librarians and readers. The CBLDF provides legal referrals, representation, advice, assistance and education in furtherance of these goals. For more information on the Fund, visit www.cbldf.org