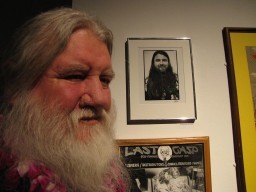 Ron Turner, the founder of Last Gasp, and patron of artists, writers, and various misfits for more than four decades turns 70 on Saturday, October 2. Baba Ron, as he’s known around San Francisco’s galleries, bars, and bookstores, has created a deep and indelible mark on his city, and the creative worlds of comics, art, and literature. I’m proud to toast Ron on his birthday, and thank him for the forty years of work he’s put into advancing comics at the helm of Last Gasp.

Turner’s origins as a comic book publisher stretch back into the late-60s Bay Area counter culture. After a stint in the Peace Corps, he became active in anti-war and social justice activism as a graduate student at San Francisco State University. A copy of Zap Comix found its way into Ron’s hands at a Christmas party in the Berkeley hills, and ignited a fierce interest in underground comix. Turner started collecting the undergrounds and sharing them with his activist colleagues. He eventually merged his activism with his interest in comics by publishing Slow Death Funnies, a benefit for a fledgling Berkeley ecology center. It was the first of what would become hundreds of Last Gasp publications.

When the underground comix economy collapsed following the 1973 Supreme Court decision in Miller v. California, Turner adapted to the adverse market conditions by placing a heavier emphasis on distribution. Here Turner’s commitment to subversive and counterculture content remained strong, and saw Last Gasp providing an outlet for small publishers to find an audience.

Over the years, Last Gasp’s output as a publisher has grown to include the new wave of lowbrow art and pop surrealism, while its distribution continues to provide a wide array of books, comics, and publications addressing subversive themes. Throughout its forty year history, the company has never swayed from its commitment to championing unfettered artistic expression, even in periods of government repression.

I worked for Last Gasp briefly in the early 2000s, serving as Ron’s publishing assistant. I don’t know that either of us knew what I was supposed to be doing, so I wound up writing a lot of marketing copy and laying out some books. But the real reason I was there was for the opportunity to hang out with Ron and listen to his war stories about publishing some of the century’s greatest and most controversial cartoonists.

In the short time I spent working in the sweaty halls of the Last Gasp warehouse, I saw that Ron employed a motley assortment of writers, artists, musicians and general misfits, many of whom were able to pursue their vocation by punching the clock at Gasp. On a daily basis, I’d encounter comics that could form the basis of a criminal prosecution in the hands of many an opportunistic D.A. We’d have drop-in visits from creative giants like Spain, Charles Gatewood, and S. Clay Wilson. I won’t ever forget a conversation with Wilson where he opened a Checkered Demon collection to a deeply lurid spread and walked me through all of the allusions to Old Masters paintings that he placed in the composition. It was a great place for a person in his early twenties with a deep interest in comics and free speech to be.

In that time around Ron and his work I learned that he found value in all forms of expression and especially in the people who create and respond to such art. He built his life around creating an environment where work that may not have otherwise found an audience could thrive, and where people with peculiar muses could earn a wage. To this day, Ron provides a platform for the unconventionally creative to find their niche.

On the occasion of his 70th birthday, I’m proud to salute him, both as an individual who’s been influenced by his work, and as the Executive Director of an organization that commits itself to the protection of comics that others would see silenced.