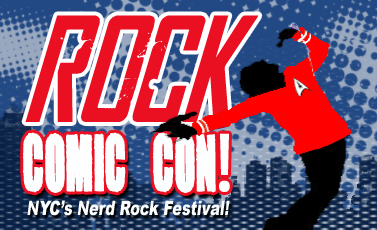 Rock Comic Con 2010 marks the premiere showcase for the burgeoning artists and sub-genre known as ‘Nerd Rock’, which displays a fascination with “geek” pop culture such as comic books,sci-fi, video games and anime and often does so with significant doses of irony and humor.

Rock Comic Con features an array of hard rocking nerd bands headlined by Kirby Krackle, the Seattle based band best known for their comic book themed material and referred to as “geek rock perfection”by Wired magazine. They are joined by the hilarious H2Awesome! whose repertoire includes catchy and well-crafted tunes, including an upbeat punk song “Why So Serious” which sets to music Heath Ledger’smemorable Dark Knight dialogue, word for word. Fortress of Attitude packs their songs with comedic,but insightful lyrics ranging in topic from American Gladiators to sleep-away camps to one man’sunending love for his time machine, all utilizing the conventions of rock, indie and punk. Bedlam Rock brings their nerd-core hip-hop sound and sensibility to round out the evening.

Special Guests include YouTube sensation Rachel Bloom, who will be performing her hit, “F*ck Me, Ray Bradbury” live for the first time since it’s become an Internet phenom garnering well over 1 million views.

And Nerdcore rapper Adam WarRock who has gained a following on the Internet through co-hosting the War Rocket Ajax podcast, as well as getting attention for his songs Ira Glass and I Gotta Believe! (Scott Pilgrim Recap)

The event will be hosted by FUSE TVs Steven Smith, a comedian, VJ and nerd in his own right. (Daily Download,Steven’s Untitled Rock Show.)

On display will be The Covered Comic Art Exhibit, featuring work by comic book artists and their Comic Cover reinterpretations from .The Covered Blog.

Rock Comic Con will also feature a slew of professional cartoonists from DC Comics, Marvel Comics and indie publishers who will be painting live art throughout the night. The art will be auctioned off and proceeds will go to benefit the Comic Book Legal Defense Fund, a non-profit organization dedicated to the protection of the First Amendment rights of the comics art form and its community of retailers, creators, publishers, librarians, and readers.

For more information and tickets check out RockComicCon.com.