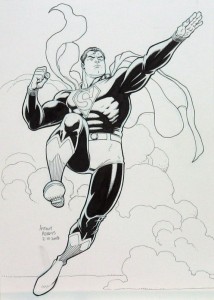 This holiday season, give the fan in your life a gift that makes a difference by donating to the Comic Book Legal Defense Fund! The CBLDF has the best donation rewards in comics, including signed graphic novels in our Rewards Zone and one of a kind original art in our eBay Store. Donations to the CBLDF are the best gift because we offer great premiums that you simply can’t get anywhere else, and most importantly, because your donation supports the CBLDF’s important legal work.

Right now the CBLDF’s Rewards Zone boasts a massive assortment of signed graphic novels from creators including Neil Gaiman, Frank Miller, Garth Ennis & more. Rewards just in include: Flash: Rebirth signed by Geoff Johns, Batman: Cacophony signed by Adam Kubert, every volume of Scott Pilgrim, signed by Brian Lee O’Malley, the Chew Omnivore Edition signed by John Layman, and the Complete Essex County signed by Jeff Lemire. All of these books are signed by CBLDF supporting creators for the purpose of rewarding our donors. All are great gifts!

If you’re looking for something even more unique, the Fund has a massive array of one of a kind art available on eBay, including original pieces by Arthur Adams, Michael Allred, Yoshitaka Amano, Lee Bermejo, Simone Bianchi, Cliff Chiang, Guy Davis, Jock, Jim Silke, and many more!

This holiday season, make a difference with your gift giving, and have the coolest gift under the tree by donating to the CBLDF!