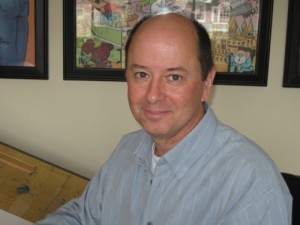 Terry Moore doesn’t mind the spotlight, but he seems much more comfortable being the one doing the watching. If you’ve seen him at a convention, he’s sincere and gracious to the people who come up for autographs or sketches or a hug to thank him for the way his work has affected them. But in the quiet moments behind the table, when it’s just Terry and a sketchbook, you’ll occasionally spot him looking at the crowd when a mischievous gleam enters his eye and his pencil starts gliding along the page. In those moments, he looks vaguely like a schoolboy in the middle of doing something naughty. Maybe that’s why he’s such a strident advocate for the CBLDF.

Terry is the the Eisner and Harvey Award-winning mastermind behind the hit independent series Strangers in Paradise, which concluded its 107-issue run in 2007, and Echo, his soon-to-conclude sci-fi superhero series about two women who share the same body. His work is informed by his keen observational nature, which manifests in stories marked by an emphasis on realistic characters, both in appearance and in how they respond to obstacles.

Terry believes in giving back and likes to go that extra mile, frequently going out of his way for his fans. In doing so, he always makes time for free speech and CBLDF. He’s a perennial fixture on CBLDF panels, charming his way through sketch jams, auctions, and more. At conventions, you’ll often find Terry and his partner Robyn proudly reaching out to their fans to help the Fund.

Recently, Terry took a moment to reflect on why the CBLDF is important to him in the latest installment of The Good Fighters.

CBLDF: How did you become aware of the CBLDF?

Terry Moore: I became aware of the CBLDF through news articles about cartoonists and retailers in legal trouble who received help and representation from the fund. And, it seems to me, quite often the CBLDF was the only one rushing to help the embattled defendant.

CBLDF: Why is the CBLDF’s work important to you?

Moore: The CBLDF is important because they fight for freedom. That’s worth fighting for, isn’t it? Freedom of expression, freedom to create, freedom to have new ideas and share them. The concept is ideal, but the fight is very real as the CBLDF travels to clients and stands beside them in court for as long as it takes to win their freedom.

CBLDF: Has your work ever come under fire — either a library challenge or outright ban? What were your feelings about that?

Moore: My work has not come under legal fire, but it is comforting to know that should I need them, the CBLDF will be there for me.

CBLDF: Why do you believe others should join you in supporting CBLDF?

Moore: Everyone should support the CBLDF because without them we are all lone targets left to pick off one by one by anyone who decides to smear a creator’s name or shut down the local comic shop because they don’t personally like what they see. Once accused, the creator or retailer faces financial ruin and jail time while the legal system eats up months and sometimes years of their finances and livelihood. Without help—without the CBLDF—these defendants face ruin. Without the CBLDF, any of us could be the next defendant. Supporting the CLBDF is supporting our freedom to live, create and share our ideas and speak our minds.

CBLDF: You’ve partnered with CBLDF on a number of fundraisers, including a special omnibus edition of Strangers in Paradise. Tell us a bit about what you’ve done with CBLDF.

Moore: There are many fun ways to work with the CBLDF. One that I’ve found rewarding is the convention Art Jam, where artists draw for a crowd and auction off the results. We’ve often had a CBLDF can at the table, where fans donate freely from their heart. I also draw on CBLDF sketch cards that people like to collect, or donate signed books, sometimes with special book plates. Prints are popular. The most unique thing we’ve done was the A-Z Special Editions of the SiP Omnibus that came with a custom made perfume named Parker Lily. I ask you, where else are you going to find something like that?

CBLDF: You’re headed to C2E2 this week. Any big plans for the show?

Moore: I plan to be at the booth full time, because I don’t want to miss anything. Hopefully, I will be able to tell people what the next series will be!

During C2E2, which takes place March 18-20 at McCormick Place in Chicago, Illinois, you’ll be able to find Terry with Abstract Studio at booth 722. You can also visit the CBLDF at booth 231 for signed premiums and to re-up your membership!

Interested in volunteering or donating to the CBLDF? Contribute here or email info@cbldf.org for more information!

← Supreme Court to Hear Case on Copyright vs. the First Amendment
C2E2 Liberty Jam! This Saturday! →